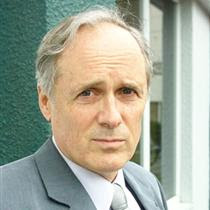 Doug Christie, who defended Ernst Zundel in the great Holocaust denial trials in the eighties has
died.
Here is a video about his passing and a piece by Michael Hoffman.
My view is that the world needs more Doug Christies and he’ll be sorely missed.
.

Douglas Christie Though it could have been from an assassin’s bullet or a terrorist’s bomb so virulent and persistent were the threats against him, Catholic attorney Douglas “Doug” Christie, Canada’s premier defender of the damned, the marginalized and the downtrodden, has died at the age of 66 from cancer, which he had been batling for approximately two years. He worked virtually up to the time of his death. He is survived by his magnificent wife, Keltie, who shared in his battle for freedom, and two lovely children who are pursuing law and engineering careers, respectively.
Christie stood up for mostly indigent Canadian “thought criminals” who were victims of censorship and prosecution directed by a government-backed, misnamed “Human Rights” cabal which seeks to protect Judaism, Zionism and Holocaustianity from the same kind of scrutiny and skepticism which every other religion and ideology faces in the marketplace of ideas.
If the criminal and civil prosecution of heretical speech and press had been suffered by Zionists and rabbis in Canada, the New York Times and Fox News would have been stuffed to the gills with regular reports and alarms. Instead, the whole sorry Orwellian ordeal of Canada’s independent thinkers has been largely flushed down the memory hole by the U.S. corporate media, which are content to stigmatize and dismiss the dissidents Doug defended, as “anti-semites” and “Holocaust deniers,” the better to deny their humanity in the name of human rights.
For truth seekers and lovers of liberty, the loss of Doug Christie is an incalculable one. His life of sacrifice and idealism is a shining paradigm. May he rest in peace. Our thoughts and prayers are with his family.
Their address is: Christie Family, Box 101, 255 Menzies Street,Victoria, BC V8V 2G6 Canada
Here below we reprint a tribute we published in 2011, when we first learned of his illness.

According to his wife, Keltie writing in her June, 2011 Friends of Freedom newsletter, 65-year-old Canadian Attorney Douglas Christie, the fearless barrister who so ably defended Ernst Zundel in two historic thought crime trials in Toronto in 1985 and 1988, has “prostate cancer of an aggressive grade that has already spread locally outside the prostate.”
Doug is one of the finest men and purest souls it has been my privilege to know. He went far beyond being Ernst’s attorney. He became his friend and a defender of the German people as a whole. In the course of the two trials he had to absorb thousands of facts, hundreds of books and dozens of maps, models and diagrams in order to defend Ernst to the best of his ability. He spent hours in court and then hours at night and on weekends studying with the Zundel defense team, led by Dr. Robert Faurisson of France. A lesser man would have been broken by the stress and the media libel. Doug relished the challenge and stepped into history’s spotlight chasing destiny.
With the brilliant and thorough organization so typical of Mr. Zundel, Doug’s daily after-court briefings in the basement of Zundelhaus were preserved on video. I have included highlights of those briefings in my documentary film, “The Great Holocaust Trial,” (not to be confused with the book of the same name).
After the Zundel trials, Doug continued his career as “the Clarence Darrow of Canada,” although he stands head-and-shoulders above Darrow, who in some respects was an opportunist (Darrow’s finest hour was his defense of Bill Heywood and the IWW in Idaho in 1907; his nadir was the 1924 Leopold-Loeb case).
Mr. Christie went on to represent dissidents, the marginal and the nearly defenseless. Among his most spectacular victories was the 1990 acquittal of Hungarian-Canadian restauranteur Imre Finta, who had been arrested on trumped-up war crimes’ charges. This was a huge setback for the same “Never Forgive” gang that on July 20, 2011, under color of law, desecrated the grave of Rudolf Hess in Germany (http://www.bbc.co.uk/news/world-europe-14232768). Talmudic vengeance knows no bounds! Doug was ably assisted in the Finta case by the equally courageous attorney Barbara Kulaszka.
Christie defended newspaperman Doug Collins, a heroic British-Canadian soldier who escaped ten times from German POW camps in World War II. Mr. Collins testified for and wrote columns on behalf of Mr. Zundel. Those columns led to his prosecution. Christie has also defended high school history teacher Paul Fromm, English anti-Talmud campaigner Lady Jane Birdwood, Internet activist Bernard Klatt, Marc Lemire, and dozens of other indigent and media-libeled victims of the new inquisition.
The Zionist lobby has had Mr. Christie in its sights for more than a quarter-century, but his record for probity was so impeccable they could find no pretext by which they could disbar or financially cripple him until 2007, when they were able to exploit a minor procedural technicality related to a law pertaining to “subpoena for documents.” The Law Society of masonic Canada ruled that this most honorable of all Canadian lawyers, in “improperly” processing the documents had been “dishonorable.” He was fined $20,000. He could not be disbarred on that basis alone however, and he continued his law practice.
Doug has given his life to the nearly thankless task of fighting for the free speech rights of everyone from Native Canadian David Ahenakew to a coterie of Christians, Germans, East Europeans, revisionists, skeptics and individualists who refused to be commissared. He has continued to press for justice in the case of Jeff Hughes, a confused and possibly mentally ill unarmed skinhead who was shot to death in 2009 by Canada’s “Mounties” for no discernible reason other than his politics. A case like this does nothing to burnish Christie’s career or fill his wallet. At the risk of sounding maudlin, Doug did it out of love for the memory of this young man who he met once and only briefly at the George Orwell Awards Dinner, which he and his wife host annually in British Columbia. Doug Christie is a traditional Catholic who cares more about living the Gospel than talking about it. The cause of justice for Jeff Hughes is but one example of his Christ-like conduct.