By Party for Socialism and Liberation 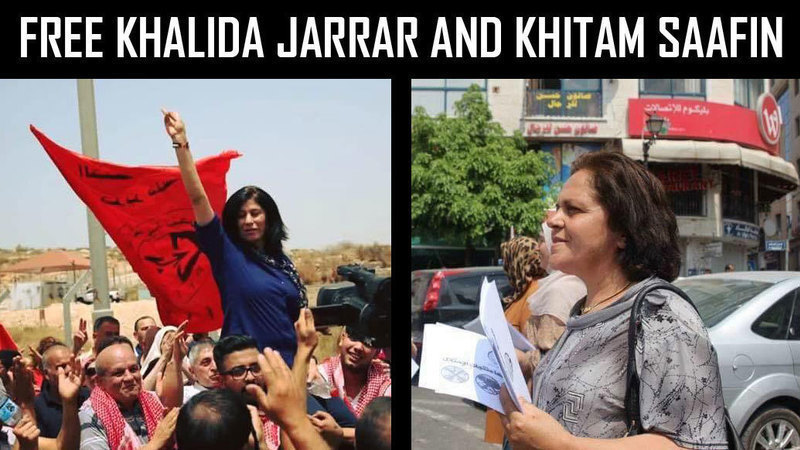 The Party for Socialism and Liberation condemns the Israeli apartheid regime for its arrest and detention of two women leaders of the Palestinian liberation struggle, Khalida Jarrar, an elected member of the Palestinian Legislative Council, and Khitam Saafin, General Coordinator of the Union of Palestinian Women’s Committees, and joins in the worldwide demand for their immediate release.

Khalida Jarrar and Khitam Saafin, arrested along with nine others in pre-dawn raids on July 2, have been sentenced to six and three months respectively of administrative detention, without charge or trial.  Israel continues its dictatorial and racist rule over the Palestinian people in the West Bank using the emergency military regulations, including administrative detention, employed by the British when they were the colonizing power in Palestine.

Khalida Jarrar, elected as a representative of the Popular Front for the Liberation of Palestine, a Marxist party, is now the thirteenth member of the Palestinian Legislative Council imprisoned by the Israeli occupation. Today she and Khitam Saafin are among more than 6,200 Palestinian prisoners held illegally in Israeli jails, nearly all for the “crime” of resisting the Israeli brutal occupation regime.  At the same time, there are zero Israelis held in Palestinian prisons.

These facts alone make undeniably clear who is the colonizer and who are the colonized, and demolish once again the myth that Israel is any kind of “democracy.”

Day after day, the killings, torture, checkpoints, settlements, house demolitions, destruction of olive and fruit groves, the theft of water, the lethal blockade and isolation of Gaza, the apartheid roads, the apartheid everything, continue. None of this could continue without the massive military, economic and political support extended to the Israeli state by Washington.

But in the face of vicious repression, the heroic resistance of the Palestinian people continues.

End all U.S. aid to Israel!