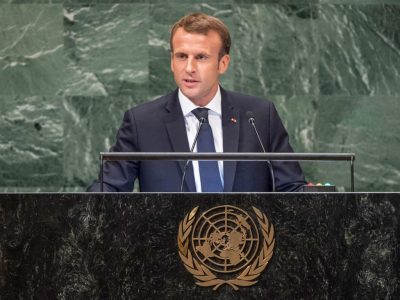 “Now we must tackle the deep causes of our imbalances, we must look together at the weaknesses of our international order and – beyond the crises I’ve just mentioned – look at the deep inequalities that have set in. For me, this is the crux of our problem today: what is rekindling nationalism and doubts about our Assembly? What is generating crises everywhere? These deep inequalities that we have been unable to resolve.
Ten years ago, when the financial crisis broke out, we took emergency measures but we did not solve the deepest problem, we did not curb the trend towards the hyper-concentration of wealth on our planet and we did not really provide an answer to all those who were left behind by globalization. All those who were marginalized and frustrated by the humiliations they had suffered harboured a despair whose price we are collectively paying today….We owe an answer, my friends, to the 265 million children, more than half of whom live in sub-Saharan Africa, who have no access to schooling, to the girls who enjoy fair access to education in less than 40 percent of all countries. We owe an answer to the 700 million children who live in the regions most exposed to the effects of climate change, who are the victims of floods, drought, rising waters, diminishing resources. ..We owe an answer to the 783 million people who live below the poverty line, who suffer from hunger or chronic malnutrition, to those who don’t have access to basic care…….The time when a club of rich countries could alone define the world’s inequalities is long gone, because the fate of every country belonging to it is inseparable from that of every member of this Assembly. Yes, we must tackle present-day inequalities today because they’re at the root of the evil I was denouncing at the beginning of my speech. We must tackle inequalities of destiny. It’s a moral aberration as much as a reality which is untenable. It is unacceptable not to enjoy the same opportunities depending on the country you are born in, not to be able to go to school in countries because you are a woman, not to access to certain basic care….Six hundred and twenty million more children in the world need to be provided with schooling between now and 2030, included 444 million Africans. …Education and health care won’t just be the pillars of our societies in the 21 century; they will be the basic components of our economies too.”

Following this address, President Macron gave one of the most democratic press conferences in United Nations memory. Charismatic, unpretentious, without a phalanx of security guards, or a spokesperson to cherry-pick journalists known to ask flattering questions, and exclude those raising controversial issues, Macron arrived alone at the podium, stating simply:

Fantasies of Worth: Macron’s French Mission. The Fifth Republic in Permanent Decline

“Ministers, Ambassadors, Ladies and Gentlemen, I am available for you.”

Journalists freely asked a series of questions on a variety of subjects, and I asked Macron directly to elaborate on his impassioned and realistic identification of inequality as one of the root causes of the crisis in the world today, and asked Macron how he would solve this appalling injustice. And, as a follow-up question, I asked for Macron’s comment regarding the concept of a “Global New Deal” called for by the late UN Secretary-General Kofi Annan and by former UK Prime Minister Gordon Brown. I added that since Macron deplored the disintegration and increasing violence in the world today, what would he think of this possibility of a new, more progressive and egalitarian social and economic order.
Macron replied that he would address inequalities by increasing investment in education, health, agriculture and economic opportunities. He added that regarding the concept of a “Global New Deal,”: “In Europe the Prime Minister of Sweden and Kofi Annan launched a very similar idea, “ and Macron added “I support that precisely.” He added:

“We need a more comprehensive and consistent view of development. It is necessary to reform, in depth, global organization of trade, and not sign trade deals with countries not compliant with the Paris agreement on environment. We need more consistent day to day social commitments, new social rules and standards.”

I later, privately, asked President Macron if he thinks the increasing inequality in the world is contributing to the increase in terrorism. He replied:

“Of course. This inequality causes great frustration, humiliation and desperation that often inevitably results in terrorism.”

French President Macron appeared on the cover of Time Magazine on November 20, 2017, with a headline stating: “The Next Leader of Europe…If Only He Can Lead France.” Macron also appeared on the May, 2018 cover of Forbes Magazine, as a leader of the “free market.” His very progressive remarks at the United Nations would appear to be in contradiction with his reputation as an exponent of “neoliberalism,” which is the economic framework which spawns those very global inequalities Macron detests and devotes a huge section of his United Nations speech denouncing, as the cause of global disasters today and, if not redressed, tragedy in the future. This seeming contradiction within Macron’s position may ultimately be resolved by the very force of Macron’s personality and intellect: he is young and fortunately extremely intelligent, and there are aspects of his personality which may compel him to make the difficult choice which has already led him to support the concept of the global new deal. He is fully aware that such a global deal requires the very restructuring of the global financial order, and there is little doubt that he possesses the agility to choose the more humanitarian, and ultimately the more sustainable arrangement involved in the construction of the global new deal hailed by Kofi Annan. According to the Time magazine article, Macron is unswervingly committed to the course he considers correct, regardless of ferocious opposition, and has demonstrated this personally, which gives promise that he can ultimately prevail over those economic and politically reactionary forces which are today causing such misery throughout the world, and endangering the very survival of humanity.