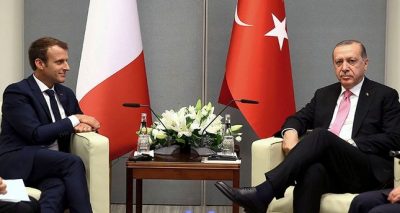 U.S. President Donald Trump’s recent surprise announcement that he plans to withdraw the United States military from Syria “very soon” and that he will let “the other people take care of it now” may be more telling of what’s to come than the mainstream media would have us believe.
The indication that Trump may let the “other people take care of it now” might appear, on the face of it, to refer to regional players and prominent backers like Russia and Iran, which have helped guide the course of the Syrian conflict to an almost certain victory for the Syrian government.
But what if Trump is actually opening the door for another Western imperial power to try its hand at taking on Syria for itself?
According to Reuters, France is looking to increase its military presence in Syria to help the U.S.-backed coalition in its so-called fight against ISIS. France has warned that a planned Turkish assault on these U.S.-backed Kurdish forces in Manbij would be “unacceptable,” according to a presidential source.
On Thursday of last week (incidentally, the same day as Donald Trump’s surprise announcement), French President Emmanuel Macron met with a Syrian Democratic Forces (SDF) delegation that included the YPG militia, which Turkey has expressly designated a terrorist entity. According to Reuters, a senior Kurdish official said Macron had promised to send more troops to the area as part of the U.S.-backed coalition’s efforts and, in essence, to present a buffer between the Kurds and Turkey.

“France doesn’t foresee any new military operation on the ground in northern Syria outside of the international coalition,” Reuters’ source said.
“(But) if the president felt that, in order to achieve our goals against Islamic State, we needed a moment to bolster our military intervention, then we should do it, but it would be within the existing framework,” the source said, without elaborating further, according to Reuters.

Some local reports are alleging that France was even contemplating sending French special forces to the Syrian city of Manbij, where Turkey is currently gearing up for an invasion of its own.
France has reportedly denied that it is planning a military build-up in Syria but has still offered to mediate between the Kurds and Turkey, an offer Ankara instantly rejected.
Interestingly enough, no media reports on these issues ask the much-needed questions regarding France’s legal basis for sending troops into Syrian territory in the first place. Never mind that Turkey has warned sternly against the move, threatening that France could become a target for the Turkish military; it bears reminding that the territory doesn’t belong to France or Turkey, anyway. Any additional military presence should at the very least be initiated in accordance with international legal norms and principles.
While much of the discourse in Syria has focused on what the Assad government is allegedly doing, no one has really bothered to question the extent of France’s involvement in Syria already to date. Last week, Turkish press agency Anadolu published a map purportedly showing French military positions in Syria, including five military bases in northeastern Syria where close to 70 French soldiers may be operating.
Anadolu also reported in mid-March that France’s top military official had already warned that France had the means to intervene in Syria independently of the U.S. and its allies, specifically in relation to the Syrian government’s alleged use of chemical weapons.While it still remains to be seen, it seems more than possible that if the Trump administration decides to take a backseat in this next phase of the Syrian conflict, the driver’s seat may be passed on to France, instead, which is reportedly looking to take the reins and involve itself even further in the country despite having any legal basis to do so.