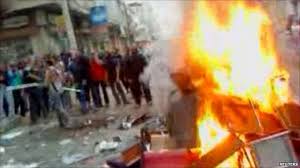 
Britons have been urged to leave Syria immediately as the situation in the Middle East country continues to deteriorate amid civil unrest.

The Foreign Office said Britons should use “commercial means” to leave while they were still available.

In a statement the FCO said it would be “highly unlikely” its embassy in Damascus would be able to help if the situation were to deteriorate further.

Evacuation options would also “be limited” it added.

Violence between protesters opposed to Syria’s leadership and the security forces has flared across the country in recent weeks.

The new advice comes amid reports of Syrian troops moving into a village firing guns and setting fire to houses, part of a campaign to crush a revolt in the north-west of the country.

The FCO has advised against travel to Syria for some time, but said its advice had been reviewed and reissued following “continued violent disturbances in urban centres across the country, including the capital Damascus”.

“Military operations and clashes between protesters and security forces have resulted in a significant number of deaths,” it added.

The advice warned that due to the ongoing crackdown, main roads and border crossings may be closed at short notice.

Certain crossings into Jordan, Lebanon and Iraq were all listed as places to avoid.

It also advised Britons to avoid public gatherings and demonstrations “of any kind” as there had been live gunfire at some events.

“If you are caught up in such a situation, you should keep a low profile, leave the area as soon as it is safe to do so and make your way to a safe location,” the statement advised.

Syrian state media reported that a policeman had been killed and many others wounded.

Saturday’s violence were centred around the town of Bdama, about 2km (1.2 miles) from the Turkish border.

Bdama is close to Jisr al-Shughour, the focus of an army operation a week ago.

The UN says that at least 1,100 people have died since protests against President Assad began in March.