From the Eyes of Tehran 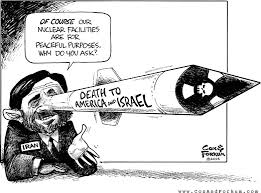 The U.S. just installed a Republican Congress which isn’t warming up to the notion of easing sanctions against Iran. But is Iran facing a similarly hardline atmosphere that’s making progress difficult to achieve?
By Sean Nevins

Ayatollah Ali Khamenei speaks at a public gathering at his residence in Tehran, Iran, Wednesday, Jan. 7, 2015. Khamenei said Wednesday the United States cannot be trusted to lift sanctions in a future nuclear deal and that Tehran should instead develop an “economy of resistance.” A portrait of the late revolutionary founder Ayatollah Khomeini hangs in background. Photo: Office of Ali Khamenei

The Iran nuclear negotiations are set to commence again in Geneva on Jan. 18, against the backdrop of a newly elected and hostile U.S. Congress.

Republican Sen. Mark Kirk from Illinois told Fox News in late December that new sanctions on the Islamic Republic of Iran will be one of the top priorities for the 114th Congress, which commenced work on Tuesday.

Meanwhile, on Dec. 30, the U.S. Department of Treasury added six people and three entities to the Specially Designated Nationals List for violating terms of the current sanctions regime on the Islamic Republic.

With this political climate on the United States’ end, it’s worth asking: What’s going on in Iran?

On Sunday, Iranian President Hassan Rouhani threatened to hold a public referendum on key economic issues. At an economic conference in Tehran, he specifically referenced the nuclear negotiations, and pushed back against hardliner politicians in the country, such as those from the Steadfastness Front that follow Ayatollah Mohammad-Taqi Mesbah-Yazdi, who is opposed to democracy and in favor of absolute clerical rule.

Al-Monitor quoted Rouhani as saying at the conference:

While news outlets around the world focused on Rouhani’s referendum threat, Farideh Farhi, a professor of political science at the University of Hawai’i at Manoa, told MintPress News that the most interesting point in Rouhani’s speech was not the referendum, but his mentioning a middle ground for resolving the nuclear negotiations.

The nuclear negotiations are currently centered on Iran’s future enrichment capabilities, including the number of centrifuges it uses to enrich uranium — a focus which has resulted in a stalemate.

Talks were postponed on Nov. 24, after the P5+1 (China, France, Germany, Russia, the United Kingdom and the U.S.) and the Islamic Republic of Iran failed to come to a comprehensive agreement following the Joint Plan of Action (JPOA), which was created on Nov. 24, 2013. The JPOA was extended until July 1, 2015.

Under the terms of the extension of the JPOA, Iran will continue to convert its 20 percent enriched uranium powder into fuel plates, which are less of a threat in terms of the creation of a nuclear weapon. It will also limit research and development, and give the International Atomic Energy Agency (IAEA) greater access to its centrifuge production sites, which should “prevent Iran from refining and mass-producing more efficient machines that could allow it to move more quickly to enrich material for weapons purposes,” according to the Arms Control Association.

The P5+1, in return, will temporarily suspend specific U.S. and EU sanctions for Iran’s trading of precious metals and petrochemicals, as well as sanctions on its automotive industry, which includes “the sale, supply, or transfer to Iran of goods… and services… used in connection with the automotive sector.” Both the government and the people of Iran will also be able to import humanitarian goods, pay the medical expenses and student fees of some Iranians living abroad, and access some $4.2 billion in frozen assets.

The P5+1 has also committed to not passing any new nuclear-related sanctions as long as negotiations continue.

Ayatollah Khamenei, the minister of foreign affairs, and parliament

Meanwhile, on Jan. 1, Iranian Foreign Minister Mohammad Javad Zarif, Iran’s chief nuclear negotiator, was summoned to a meeting in Iran’s parliament, where he was asked about the negotiations.

Some of the members of parliament (MPs) were reportedly concerned about his intentions as Iran’s chief representative in the negotiations, and whether he was using his position for domestic political gain. In response to these allegations, Zarif said that “factionalizing” foreign policy pursuits for political status was an “unforgivable sin.” He defended himself and the country by explaining that the nuclear discussions have enabled the foreign ministry to project an “interactive, stable and powerful” image of Iran which has made the country more secure, according to the Tehran Times.

Hardliner MPs at the question and answer session asked about Zarif’s negotiation tactics and his relationships in direct talks with the U.S. in an attempt to discredit his actions, explained Farhi. However, such questioning came from a relative minority, and the MPs were generally approving of his, and Rouhani’s, efforts in the nuclear talks.

“Support for negotiations remains strong [in Iran] even though the results have not necessarily been what they wanted, and that the U.S. is asking for too much and giving too little,” Farhi said.

She described the Supreme Leader Ali Khamenei’s role as “extremely instrumental” toward the continuation of the talks.

“When hardliners’ criticisms began to pick up, he came in and said, ‘These are children of the revolution and they’re doing their best. And whatever is not working, it’s not because of them, it’s because of what’s going on in the United States,’” Farhi explained.

Zarif answered a total of seven questions posed by 40 lawmakers. In a follow-up vote-of-confidence, 125 MPs voted in favor of him, 86 voted against, eight did not express a preference and 10 abstained.

Farhi explained that Iran is currently undergoing a public and official debate about the nature of the nuclear program and the country’s relationship with Western powers.

People have started coming forward to openly question the nuclear program as an energy program.

In December, the University of Tehran had an uproarious conference in which the panelists – Sadeg Zibakalam, Ahmad Shirzad and Davoud Hermidas-Bavand – bravely criticized the country’s nuclear program.

Ahmad Shirzad, a nuclear physicist at Isfahan University of Technology and a former MP from the 2000s, said, “During that time in parliament, I said that no water will come from the nuclear well. … Not even a glass of water,” reported Al-Monitor.

“If you ask me why the country went in a nuclear direction, I have to answer that I do not know,” he continued.

Shirzad is also reported to have said that Iran does not have the technological capability to operate a nuclear program.

Another critic of the program at the conference was Sadegh Zibakalam, a political science professor at the University of Tehran, who said the economic consequences of the nuclear program have been more devastating to the country than the Iran-Iraq War in the 1980s.

Likewise, Davoud Hermidas-Bavand, a professor of international relations at Allameh Tabatabaei University in Tehran, said, “On the nuclear issue, the process of resistance against bullying went in a direction that in the long run, reduced other inalienable rights. Every time the negotiations end without a resolution, it results in new sanctions.”

The reformist voices were sharply denounced and threatened by hardline factions within Iran’s government and media, while citizens engaged in the discussion — both for or against — online and in chat rooms.

However, Farhi says their criticisms are not what is important. What is important, and what makes her “not hopeless” about prospects for a deal, is that a debate is happening at all. She says it signals that among Iranian society there is some hope for reconciliation around the nuclear issue.

Rouhani’s idea to have a referendum was not a threat, she explained. It was a “hint” to the hardliners that the population wants some sort of resolution to the nuclear issue. “They are not necessarily that hung up on the idea of ‘honor,’” she said.

Meanwhile, back in the U.S., the all too familiar sounds of the drums of war beating for Iran can be heard from powerful government officials and the country’s preeminent news publications.

“Currently out of favor in many circles, regime change has a proven track record in helping put a number of bad actors out of the nuclear weapons business,” Hannah wrote.

“For all the subsequent problems that may have flowed from Operation Iraqi Freedom, the removal of Saddam’s regime put to rest forever the legitimate fear that the ‘Butcher of Baghdad’ would one day find a way of getting his hands on the world’s most dangerous weapons.”

Yet his assessment overlooks the fact that Iraq and surrounding countries may be experiencing a fate far worse than a nuclear bomb, as a result of the U.S. excursion into the country.

Juan Cole, professor of History at the University of Michigan, wrote in June that the rise of ISIS in Iraq is “an indictment of the George W. Bush administration, which falsely said it was going into Iraq because of a connection between al-Qaeda and Baghdad.”

“Ironically, by invading, occupying, weakening and looting Iraq, Bush and Cheney brought al-Qaeda into the country and so weakened it as to allow it actually to take and hold territory in our own time.”