That a single corporation has such a monopoly over the flow of worldwide news is already problematic, but the increasing meshing of corporate and US government control over the means of communication is particularly worrying
by: Alan MacLeod

There is similar mistrust of Facebook, with only 20 percent of Americans agreeing social media sites do a good job separating fact from fiction. (Photo: FAIR)
Media giant Facebook recently announced (Reuters, 9/19/18) it would combat “fake news” by partnering with two propaganda organizations founded and funded by the US government: the National Democratic Institute (NDI) and the International Republican Institute (IRI). The social media platform was already working closely with the NATO-sponsored Atlantic Council think tank (FAIR.org, 5/21/18). 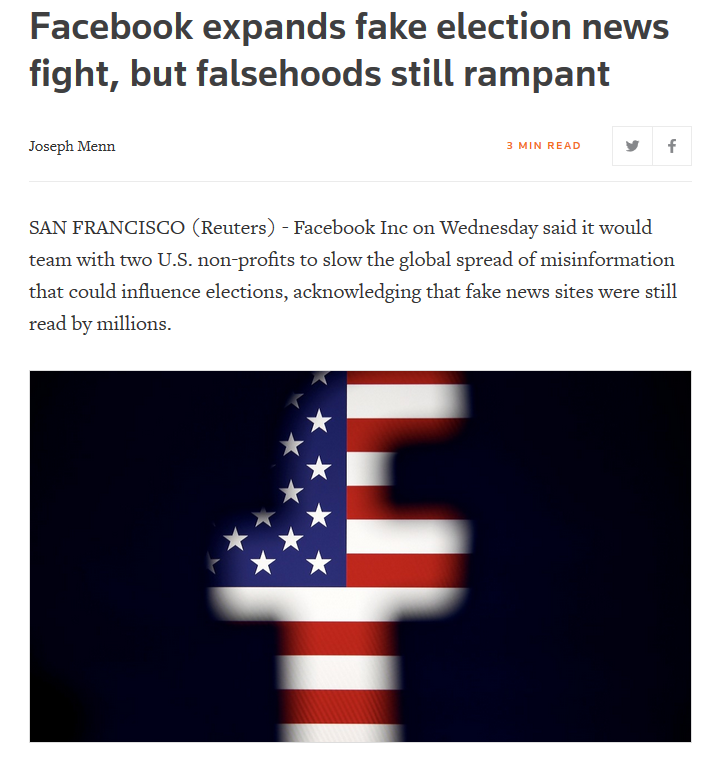 Reuters (9/19/18) described two branches of the National Endowment for Democracy, set up by the Reagan administration during the Cold War to promote US foreign policy objectives, as “two US nonprofits.”

In a previous FAIR article (8/22/18), I noted that the “fake news” issue was being used as a pretext to attack the left and progressive news sites. Changes to Facebook’s algorithm have reduced traffic significantly for progressive outlets like Common Dreams (5/3/18), while the pages of Venezuelan government–backed TeleSur English and the independent Venezuelanalysis were shut down without warning, and only reinstated after a public outcry.
The Washington, DC–based NDI and IRI are staffed with senior Democratic and Republican politicians; the NDI is chaired by former Secretary of State Madeleine Albright, while the late Sen. John McCain was the longtime IRI chair. Both groups were created in 1983 as arms of the National Endowment for Democracy (NED), a Cold War enterprise backed by then–CIA director William Casey (Jacobin, 3/7/18). That these two US government creations, along with a NATO offshoot like the Atlantic Council, are used by Facebook to distinguish real from fake news is effectively state censorship.
Facebook’s collaboration with the NED organizations is particularly troubling, as both have aggressively pursued regime change against leftist governments overseas. The NDI undermined the Sandinista government of Nicaragua in the 1980s, and continues to do so to this day, while the IRI claimed a key role in the 2002 coup against leftist President Hugo Chávez of Venezuela, announcing that it had

served as a bridge between the nation’s political parties and all civil society groups to help Venezuelans forge a new democratic future…. We stand ready to continue our partnership with the courageous Venezuelan people.

The Reuters report (9/19/18) mentioned that Facebook was anxious to better curate what Brazilians saw on their feeds in the run-up to their presidential elections, which pits far-right Jair Bolsonaro against leftist Fernando Haddad. The US government has a long history of undermining democracy in Brazil, from supporting a coup in 1964 against the progressive Goulart administration to continually spying on leftist President Dilma Rousseff (BBC, 7/4/15) in the run-up to the parliamentary coup against her in 2016 (CounterSpin, 6/2/17).

Glenn Greenwald (Intercept, 12/30/17) reported that “Facebook has been on a censorship rampage against Palestinian activists who protest the decades-long, illegal Israeli occupation, all directed and determined by Israeli officials.”

Soon after it partnered with the Atlantic Council, Facebook moved to delete accounts and pages connected with Iranian broadcasting channels (CNBC, 8/23/18), while The Intercept(12/30/17) reported that in 2017 the social media platform met with Israeli government officials to discuss which Palestinian voices it should censor. Ninety-five percent of Israeli government requests for deletion were granted. Thus the US government and its allies are effectively using the platform to silence dissenting opinion, both at home and on the world stage, controlling what Facebook‘s 2 billion users see and do not see.
Progressives should be deeply skeptical that these moves have anything to do with their stated objective of promoting democracy. Bloomberg Businessweek (9/29/17) reported that the far-right Alternative fur Deutschland (AfD) party went to Facebook headquarters for discussions with US companies about how it could use the platform for recruitment and micro-targeting in the 2017 elections. AfD tripled its previous vote share, becoming the third-largest party in Germany, the far right’s best showing since World War II.
Public trust in government is at 18 percent—an all-time low (Pew, 12/14/17). There is similar mistrust of Facebook, with only 20 percent of Americans agreeing social media sites do a good job separating fact from fiction. And yet, worldwide, Facebook is a crucial news source. Fifty-two percent of Brazilians, 61 percent of Mexicans, and 51 percent of Italians and Turks use the platform for news; 39 percent of the US gets their news from the site.
This means that, despite the fact that even its own public mistrusts it, the US government has effectively become the arbiter of what the world sees and hears, with the ability to marginalize or simply delete news from organizations or countries that do not share its opinions. This power could be used at sensitive times, like elections. This is not an idle threat. The US created an entire fake social network for Cubans that aimed to stir unrest and overthrow the Cuban government, according to the Guardian(4/3/14).
That a single corporation has such a monopoly over the flow of worldwide news is already problematic, but the increasing meshing of corporate and US government control over the means of communication is particularly worrying. All those who believe in free and open exchange of information should oppose Facebook becoming a tool of US foreign policy.