People so willing to see the EDL’s point of view rarely address the most obvious question, why does the English Defence League pick certain locations to have their demonstrations?

The answer is simple, because those areas tend to have a high ethnic makeup and it allows the EDL to intimidate ordinary people in their own streets.
That’s what many modern British neofascists want, racial conflict, pitch battles in the streets, etc etc.
It is a common tactic employed by the Extreme Right, as American readers will remember. Please watch the video from Toledo, Ohio and think of the similarities in modern day Britain.
Yet, as we see, the true motivations of the EDL and their associated gangs rarely come up.
Still in Leicestershire they seem to have got the mark of the EDL, as this is leicestershire reports:

“Police fear protesters plan to attack a city mosque before marching into the heart of Leicester’s Muslim community.
Concerns were voiced by Chief Constable Simon Cole in a report to Leicester City Council about the planned march by the English Defence League on October 9.
The Chief Constable said that an intelligence and threat assessment indicated a “major threat” to public order.
His report said: “Intelligence dated September 8, 2010, indicated that the EDL intend to come to Leicester and attack a mosque before marching into the Highfields area, which represents the highest resident population of the Muslim community. “ 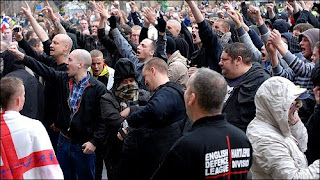