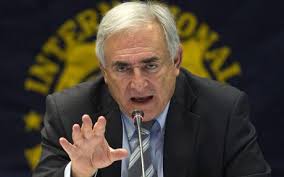 
The attempted rape and sexual abuse of an African cleaning woman by the Managing Director of the International Monetary Fund, Dominique Strauss-Kahn (DSK) embodies, in microcosm, the entire historical and contemporary legacy of colonial neo-colonial relations. Efforts to portray this criminal act as an individual obsession or a personal failing or a “Latin idiosyncrasy” fail to take account of the ‘deep history’ in which these psychological pathologies are embedded.

The first clue is evident on the very surface – skin deep – of the antagonists: On the one-hand, a powerful white European politician representing the collective will of an organization representing the global capitalist class, one with the financial resources to severely punish poor and indebted countries that disobey its prejudicial economic fiats; on the other, a single mother, a black working woman from a former French colony in West Africa (Guinea), which was ‘stripped clean’ by the departing French colonial officials for daring to assert its independence and subsequently forced to submit to endless ‘neo-colonial’ economic impositions ensuring its stagnation and subordination.

Was it “lunacy”, as Martin Wolf of the Financial Times would claim, that DSK would throw over a powerful, prestigious post and likely the Presidency of France, for a moment of violent sex? Or was it the playing out, and living through, the historical roles, deeply embedded in the psyche and cultural mores of a descendant and practioner of colonial realities: imposing his sexual demands on a ‘black servant’. No doubt the fact that the cleaning woman spoke French and came from a former French colony, one which had suffered numerous subsequent ‘French’ and IMF impositions, gave the powerful predator the sense of ‘entitlement’ to prey on black flesh, just as so many of his compatriot predecessor officials had done to ‘their’ servants in the course of administrating the colony. No doubt, in more recent times , it is common for top officials from international financial institutions visiting Africa to pad their expense accounts by hiring hookers to “service them,” while they impose austerity policies impoverishing countries and forcing millions to flee overseas in search of menial labor … as cleaning workers in luxury hotels. “Colonial familiarity”, the ‘shared’ language of oppressor and victim – perhaps excited the perverse sexual obsession.

The Colonial Legacy: The Social Psychology of Rape

The history of the European, and later US, colonial conquests, imperial wars and military occupations is a story of plunder, enslavement, exploitation and, above all, assertion of supremacy and power. Profits and pleasure accrue to the big mining and banking executives as well as colonial officials, especially among those in the upwardly mobile middle class who see in their new found power a chance to satisfy the whims and fancies denied them in their ‘home’ cities and among their domestic families and friends.

The absolute power of the colonial administrators allows them to secure total submission from those who are powerless – the single African women isolated from family, friends – before the Courts of Justice and denied equality .The latter is subject to firing, blacklisting, unemployment, intimidation, humiliation and insults for daring to denounce their colonial superiors. These circumstances and relations are reproduced today in all the countries subject to the dictate of the IMF, the Central Bank of Europe and the US Treasury.

Contemporary Neocolonialism: They Come, They Plunder, They Rape

The IMF and their imperial financial accomplices take advantage of the debts and crises of corrupt and complicit rulers to dictate terms for loans. The top officials seize sovereignty and impose economic policies, which privatize and de-nationalize the entire economy, reduce wages and pensions, worsen working conditions and retain a veto on all local economic appointees. The IMF and Central Banks re-colonize the debtor country: All earnings from trade and investment are primarily directed outward and upward. The neo-colonial division of labor involves imperial capital and black labor.

Embedded in this world-historic system of power, the powerful officials of international organizations have the financial and military backing of the US and the EU: the Directors are appointed by Euro-Americans and they enforce the rules of the game by which they prosper. As close collaborators and past and future partners of the private corporate wealthy, and likely political leaders in imperial regimes, the ‘international officials’ live and share the power, wealth, luxury and perks of the very wealth. They fly first class and they stay at the most luxurious suites in 5-star hotels. They are treated by their debtor ‘hosts’ as royalty. Above all, they are used to being obeyed: They expect submission. They believe their whims and perversions are ‘natural outgrowths’ of their ‘healthy appetites’ stimulated by their high-energy travels, frequent meetings and forcible dictates. If the top local officials of a debtor nation submit, who are the cleaning women to object? They should be honored to be chosen “to serve” the makers and breakers of entire economies and the livelihoods of millions.

DSK, the imposing ruler over the major global financial institution, did not expect his sexual advances to be resisted by an immigrant, a former French colonial subject. Initially denied submission, DSK relied on force and violence. Just as when workers and the unemployed launch general strikes and mass protests against IMF-dictated austerity programs, the regimes order the police and armed forces to impose subjection through violence. The black cleaning worker did not struggle and then submit, as too often is the case with workers’ movements. She made her outrage a public issue – she un-masked the violent criminal behavior that lay behind the respectable, affluent facade. She confronted the ruler before the larger democratic public. The public face of international finance capital, the head of the same predatory institution that rapes entire working populations in the name of vacuous euphemisms (“financial stabilization”) is nothing less than a crude crotch grabber – a sleazy lecher.

How many millions of Indo-Chinese and Algerian working-class and peasant women and their descendants, who suffered similar indignities during the French colonial administrations, must now feel vindicated by the simple act of denunciation by the Guinean cleaning woman, so far from Africa, but so close to the hearts of rebellion against the universal injustices inflicted daily by the IMF and its local accomplices!

The Reactions of the Left: the French Socialists)

Not surprisingly, the majority of French “Socialist” opinion has defended DSK and accused his victim, the black African working woman, of being part of a sinister capitalist conspiracy against the principle chosen mouthpiece and enforcer of international capital.

The French Socialist Party has a long and sordid history of supporting bloody colonial wars: Indo-China, Algeria and dozens of military interventions in Africa. Today they support the wars against Libya, Iraq and Afghanistan. As always, there are “dissidents”, left-wingers, “critical” intellectuals and “Trotskyist” factions who speak for the “rights” of the accused, as well the victim, but who looked to DSK, the head of the IMF and his millionaire backers, as their ticket back to the Palace Elysee, the Presidency and the spoils of office.

“Colonial Socialism” in Europe, like “imperial liberalism” in the US, has a long and ignoble history: Both ‘trust’ the word of innocence of an indicted financier over the accusations of an immigrant black cleaning woman, which is not too surprising. They have a history of converting criminals into victims and the victims into criminal… conspirators.

One has only to look at the French Socialists and US Liberals support for Israeli colonialist over the Palestinians “terrorists”; or NATO occupiers against the Afghan resistance; or Tunisian autocrats over pro-democracy protestors.

The fact that sectors of the ‘left’ in France and America can claim DSK as a victim of some ‘elite conspiracy’ is a clear sign of their total and complete degeneracy and the perversion of any semblance of progressive sentiment. Under Strauss-Kahn’s dictates the IMF has imposed the most reactionary social cuts in recent history on Spain, Greece, and Portugal: Unemployment is 45% for under-30 year-olds in Spain and overall 22%; in Greece 16% and Portugal 13%. Pensions have been reduced by 15% and wages by a similar or greater amount. Vast sectors of the Greek economy, valued at 50 billion Euros are to be privatized, as DSK plays to the private multi-nationals. Under IMF austerity policies Southern European economies are regressing – as public investments and private consumption shrink and negative growth rates hover between 5% – 10% over the past 3 years with no end in sight.

If there is any ‘conspiracy’ to frame DSK it certainly does not come from any ‘elite’ or ‘banking cartel’. What is much more likely, is that after the initial jailing and indictment, the financial powers backing DSK will move into action – they have secured his conditional release under bail; the victim and accuser has been subject to intense police interrogation and more ‘media’ and legal pressure can be expected to force her to retract charges. The legal system rarely ever works in favor of working-class victims facing a high powered legal team backing a millionaire predator, especially one who speaks and works for the international capitalist class.