Brian Haw and some camp followers have hung in for a long time at Parliament Square to protest wars on Iraq, Afghanistan, in Palestine, now on Libya. Well, it’s really a protest against war in general now. Many methods have been used to try to get rid of Brian Haw but now it looks like the end is nigh. 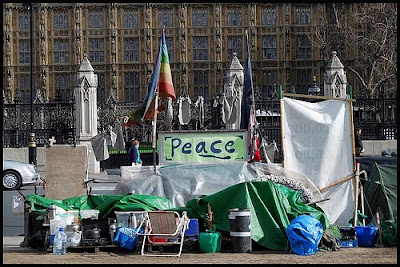 Here’s The Independent from a few days ago:

Brian Haw’s anti-war protest camp has dominated Parliament Square for 10 years, cut off from curious pedestrians by the busy lanes of traffic that surround it.
Now Westminster City Council wants to change that by installing a pedestrian crossing. Although they claim their intention is merely to make it easier for Londoners and tourists to access the square, its creation is also likely to result in the eviction of Mr Haw and the protesters gathered around him.
In March, a High Court ruling obtained by the Mayor of London Boris Johnson forced Mr Haw to move his camp from the grass on the square to the pavement.
Now the council, which is responsible for the pavement, is seeking to repeal his right to sleep there too – by establishing that he and his fellow protesters are “proving an obstruction to the footway” and acting as a “hindrance” to pedestrians. Mr Haw, a carpenter from Worcestershire, set up his camp in 2001 and remained there until September last year, when he was flown to Germany to be treated for lung cancer.

Well now there are two letters protesting the move against the peace camp:

So it looks like a pedestrian crossing will spell the end for Brian Haw and his peace camp (report, 3 June)?
This is a great shame because, even for those not directly associated with his cause, the camp provides a important (and colourful) focus for our consciences in stark contrast to all-pervasive advertising which dominates the rest of London aggressively encouraging us to indulge in “the latest gadgets, cheap flights and various forms of fast food”.
In my view, we could do well to have a little more “conscience” and a lot less “stuff”. Indeed, Councillor Colin Barrow mentions, “We of course support the right to protest and will continue to do so […]”. If this is the case, why not lift the ban on protests within a half-mile radius of Parliament Square?
Alan Mitcham
Cologne, Germany
When I first visited London after moving back here from America, I was delighted by the sight of Brian Haw’s protest camp in Parliament Square. What a lesson, for tourists from China or even America, in the tolerance that ornaments a free society.
How disillusioning to learn that our society, too, has set over itself humourless and narrow-minded repressors such as the Mayor of London and the Westminster council (“Pedestrian crossing may spell the end for Westminster peace camp”, 3 June).
Guy Ottewell
Lyme Regis, Dorset

It’s been a remarkable protest. Still it ain’t over til it’s over.