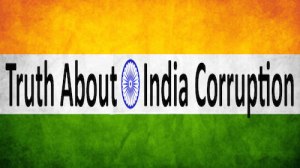 By Graham Peebles
Since Independence in 1947 endemic corruption has been part and parcel of daily life in India.
The scale of corruption is immense and the cost to the country staggering. According to Global Financial Integrity, illicit financial flows since 2007 have averaged USD 52 million. A staggering “USD 123 billion was lost in the last decade,” which is “30 times the amount New Delhi spent on social services like health care and education last year”.
Corruption divides broadly into two distinct areas: political and corporate scams involving government ministers, members of parliament and their business buddies; and what we might call “domestic bribery”. Forced into criminality by a system of governance built on dishonesty, exploitation and greed, citizens throughout the country – rich and poor – bribe officials to avoid problems with state authorities, speed up applications for permits, licenses and utilities, and secure entitled services. For example, over 75 per cent of slum dwellers report “having paid a bribe to secure basic necessities such as kerosene or medical care.”
Nobody in the country trusts politicians, and figures gathered by Transparency International, a non-governmental organization (NGO) that tracks corruption, places the police and the judiciary second and third as the most corrupt bodies in the country. In fact there are no institutions, including health, education and domestic NGOs (often little more than a front for criminality and exploitation) that are perceived to be corruption free and, according to 92 per cent of Indians, it’s getting worse.
Major fraud or petty backhanders, the process of corruption is essentially the same, albeit more or less intricate: need a driving licence, or land to build on; looking to mine coal, start a small business, sell some helicopters, light up your home or have sanitation plumbed in for your family: an envelope stuffed with rupees or shares in the business is the most persuasive language of facilitation, swiftly cutting through reams of bureaucratic red tape. Transparency International records that “54 per cent of Indians say they paid a bribe last year” (the worldwide average is 39 per cent). Two-thirds of people polled admit bribing police, 63 per cent paid bribes for Land services (buying, selling, renting and inheriting property), over half confessed to bribing tax officials, 45 per cent to the judiciary. And a quarter paid bribes to secure medical treatment and education for their children.

Despite recording economic growth averaging 9 per cent for the last two decades, India stands 136th (of 186) in the United Nations (inequality adjusted) Human Development Index (UNHDI), below Iraq and Syria. With growth currently at 6 per cent, the economic miracle is showing signs of petering out. Not that GDP figures make any difference to the 800-million-plus miraculously living on less than USD 2 a day – these marginalized masses are paid a pittance, denied sanitation and health care, and forced to live impoverished, degrading lives.
The growth “slow-down” is thought by many analysts to be partially caused by corruption. Not the petty daily bribes paid by the poor for electricity, but the multimillion dollar scams that have poisoned Indian politics and created an atmosphere of distrust and cynicism around politicians and officials.
In Transparency International’s Corruption Perception Index, which “ranks countries/territories based on how corrupt a country’s public sector is perceived to be”, India finds itself slumbering 94th (of 177), below Djibouti (regarded by many as a failed state) and Columbia. In the World Bank’s 2014 “Doing Business” report, it comes in 134th (of 189), placing it firmly behind the likes of Yemen, Ethiopia and Uganda as a country to set up, run and do business in.
Traditionally endemic, but small in scale, levels of state corruption have recently soared to stellar heights with a catalogue of major corruption cases floating to the putrid surface of political life. A comprehensive study by the global consultancy firm KPMG found that corruption today “is not about petty bribes anymore but scams to the tune of thousands of rupee crores” (ten million rupees, equivalent to  USD 167,000). These large scams can be “attributed to the willingness of the private sector to pay senior public officials to get their work done”.
Since market liberalization in the early 1990s large scams involving government officials and billions of dollars have become almost as common as low-level graft. As the economy was opened up and America and neo-liberalism became India’s natural allies, undreamt of criminal riches and veins of dishonesty were discovered. The economic model, which sees everything and everybody as a commodity to be profited from, fitted snuggly into the already corrupt gloves of Indian political corporate affairs.
Property, mining licences and the commercialization of the countryside, involving a plethora of privatizations, together with public-private partnerships in infrastructure projects, were gifts from the gods for the devoutly devious, presenting opportunities for grand scale manipulation. It’s even suggested by some in the know that “the rupee, one of the world’s most actively traded currencies, is manipulated by politicians for personal gain”.

These high profile cases indicate the range of corruption:
In 2010 the Commonwealth Games, which cost almost 18 times their budget estimate, were marred by gross misallocation of funds and financial irregularities. Suresh Kalmadi, who was in charge of the Games, stands accused of corruption, cheating, forgery and criminal conspiracy along with nine others. Cronyism saturates sport: in 2012 the International Olympic Committee suspended the Indian Olympic Committee over its electoral process; the richest cricket tournament in the world, the Indian Premier League has been riddled with allegations of corruption and fraud since its creation in 2008.
There was the 2G telecommunications scam in 2010, in which government officials sold hundreds of licences to favoured telecom companies at basement prices. The loss to the treasury is thought to be GBP 37 billion.
The mining sector is rife with corruption, Human Rights Watch states. “India’s mining industry is poorly regulated and the government is indifferent to endemic lawlessness within the sector.” In 2010, there “were more than 82,000 instances of illegal mining operations”. What little regulation there is, is “self-regulation”. Environmental Impact Assessment (EIA) reports are “commissioned and paid for by the very companies seeking permission to mine” and pay little if any attention to human rights and community concerns.
Whether it’s violating the land for bauxite in Orissa by the Vedanta Group (which has caused the violent displacement of Adivasi people in the area), illegal mining in Goa or Hardwar or the Aravali Range in Rajasthan, bribery and corruption is involved from top to tail, beginning to end.
In 2010, a political scandal nicknamed “Coalgate” surfaced. Mines were sold off cheaply to public sector entities and private companies and Prime Minister Manmohan Singh was implicated. The comptroller and auditor-general accused the government of allocating coal rich mines in an underhand manner from five years up to 2009. It is estimated USD 34 billion was lost to the government. The same year saw the Iron-Ore graft in the State of Karnataka, in which an “illegal mining mafia… made profits of USD 2 billion or more shipping illegal iron ore to China”. Hundreds of local officials and politicians were involved, including G. Karunakara Reddy and G. Janardhana Reddy (owners of one of the key conspirators, the Obulapuram Mining Company) who were ministers in the state government at the time and seemed to “rule the roost”.
And last year a series of million dollar scams hit the headlines, among them a railway promotion scam – predictably named “Railgate”. Bribes valued at USD 150,000 were allegedly paid to Pawan Kumar Bansal, the railway minister at the time. The Augusta Westland Helicopter scam was another. Senior politicians and military men have been accused of taking bribes amounting to USD 15,943,000 from Finmeccanica, the parent company of Westland, to secure an order for the supply of 12 helicopters (worth USD 600 million) from the British-based aircraft manufacturer. And let’s not forget Vodafone, which was in cahoots with the union minister, Kapil Sibal, and the law minister, in a USD 2,530,000 tax dodge.

While 20 years of growth may have spawned a new middle class (approximately 50 million, or 5 per cent of the population), it is the elite that has benefited from deregulation. The number of billionaires has increased from six to 61 in the last decade, concentrating “USD 250 billion among a few dozen people in a country of 1.2 billion”, according to Oxfam. The elite increased their hold on the country’s wealth “from 1.8 per cent in 2003 to 26 per cent in 2008”, much of which is hidden overseas in “shell companies”, avoiding tax. The very rich “have started buying politics, and the great churning in India you see against corruption is essentially about the purchase of politics by the wealthy,” says the Financial Times.
While India’s billionaires wallow in complacent luxury, two-thirds of the population live in dire poverty, almost half the nation’s children suffer from malnutrition and tens of millions, mainly Adivasi (indigenous) and Dalit people, have been displaced by mining and infrastructure projects. Government spending on the poorest and most vulnerable in society is among the lowest of any “middle income country”. According to the Asian Development Bank,  expenditure on health care is a mere 1 per cent of GDP, meaning in rural areas where 80 per cent of the population lives, there is practically no access to medical services.
In addition to withdrawing support from the poor and subsidizing the elite, economic development has also “expanded the possibilities for rent-seeking.” Rent-seeking theEconomist explains, is “the use of wealth to distort the allocation of resources from which more wealth could be produced”.
The last 10 years have seen a destructive union between wealth creation and corruption firmly established. During this time “almost all of the billionaires created in India have been created because of the proximity to politics”, according to theFinancial Times. Research by Michael Walton of Harvard University and Aditi Gandhi of Delhi’s Centre for Policy Research found that of India’s 66 billionaires, around half made their money in “rent-thick” sectors – “i.e. where profit is dependent on ‘economic rents’ for access to scarce resources, such as land or the telecoms spectrum, which are typically only available via government permissions”.  “Permissions” that are bought. Bribes are paid in cash, gold or through a stake in the business. Bribes are also paid into offshore accounts held in Switzerland and other such tax havens.
Not only are the politicians corrupt, but the political system itself is fuelled by bribes. Illegal party funding, the Economist found “is at the heart of corruption”.
At the end of 2013 India’s parliament appointed an anti-graft ombudsman bill. The ombudsman “will be appointed by an independent committee comprising the prime minister, the head of the Supreme Court, the leader of the opposition and an eminent jurist”, Reuters reports. The Supreme Court is regarded as one of the few clean institutions in the country, but it’s hard to see how a committee with the prime minister on it can be truly independent, or that more laws are needed. India does not lack laws: whether it’s legislation governing environmental issues, women’s rights or corruption, there are laws aplenty. What is lacking is the will to implement existing regulations. On the rare occasion when someone is charged with corruption, prosecutions can take up to ten years; as a result nobody bothers to makes complaints. “In the past three years only 25 top civil servants have been investigated and none has lost his job,” theEconomist says.
India prizes itself on being the world’s largest democracy, meaning it has the biggest population of any country in which citizens get to vote. Self-interest and corruption have no place in a functioning democracy and must be purged from political life and civil society. Democracy is not only the right to vote: participation, social justice and equality are fundamental to the democratic ideal, and are widely absent throughout India.