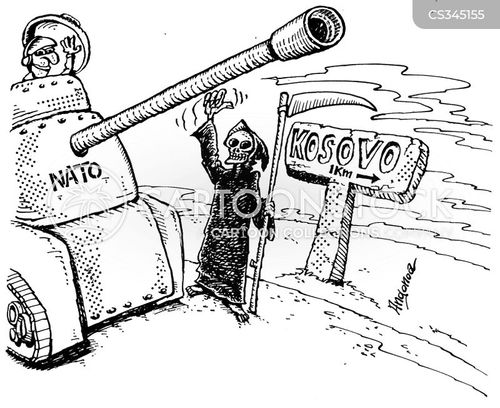 NATO carried out a 78-day campaign of airstrikes against Yugoslavia in 1999 after accusing Belgrade of committing war crimes in Kosovo. The strikes left up to 5,700 civilians dead, and contaminated part of southern Serbia with radiation from the depleted uranium rounds used by the alliance.
The Serbian government-designated Commission Investigating the Effects of NATO’s 1999 Bombing of the Federal Republic of Yugoslavia has provided Sputnik with important information about some of its preliminary findings.
Speaking to Sputnik Serbian, commission head Dr. Darko Laketic explained that in the course of visits to cities, towns and municipalities affected by the NATO bombings, the commission has been able to establish what appears to be evidence of a link between the depleted uranium rounds dropped in these areas and a rise in cancer incidence.
According to the physician, in the city of Vranje, southern Serbia, out of 40 people who came into direct contact with soil contaminated by depleted uranium, ten have died, with “the majority of the deaths caused by malignant neoplasms.”
“Many people who have been to the affected areas suffer from the symptoms of erythema and ulcerous eruptions of an unknown etiology on their skin,” Dr. Laketic added.
Commission members have already visited Vranje, Pancevo and Novi Sad, and plan to visit Kragujevac, with all of these areas facing heavy NATO bombing in 1999. “These are our priority regions. We are collecting medical and statistical data from medical institutions in these areas and interviewing people who have come into contact with contaminated soil,” Laketic explained.
The doctor noted that in the village of Borovac, another area struck by NATO bombs, three residents, or one percent of the village’s total population, are suffering from malignant brain damage.
Dr. Laketic noted that an increase in oncological diseases has also been observed in Pcinjski District, and said that this was particularly significant, since the area’s population is younger than the Serbian average.
The commission is now working on the creation of a large, systematized database.
“We are investigating the effects of toxic substances. Our task is to establish the causal links between [NATO’s] actions and illnesses. Having established them, we will receive weighty arguments for organized efforts in the detection, prevention and treatment of cancer at its early stages in those regions where it is necessary,” the doctor said.
According to Dr. Laketic, in addition to depleted uranium, other toxic substances released during NATO’s bombardment, such as chlorine, benzene, and polychlorinated biphenyls are also proven to cause illness, including malignant neoplasms which can lay dormant for five, ten or even twenty years after a person first comes in contact with them.
Established in June, the commission hopes to complete its first preliminary report by 2020. Dr. Laketic will report on the status of his team’s investigation in the Serbian National Assembly in December.
According to openly available data, in the late 1990s, the average Serbian death rate from oncological illnesses hovered between 9,000 and 12,000 people per year. By 2014, however, the figure doubled to 22,000, with the number of newly diagnosed cancer patients reaching 40,000.
Some medical doctors and scientists have attributed the jump in cancer rates to NATO’s use of depleted uranium rounds during its bombing, and have pointed to the rise in leukemia and lymphoma, cancer types affecting tissue most sensitive to ionizing radiation. Other experts have maintained that there yet to be conclusive proof of a relationship between cancer rates and the depleted uranium rounds, since cancers have been growing across Serbia, while depleted uranium rounds were dropped primarily in southern Serbia. According to World Cancer Research Fund statistics, Serbia is 18th in the world in total incidence of cancers, with 307.9 cases per 100,000 residents reported in 2018.

Bombing to protect? RT documentary looks at reality of NATO’s attack on Yugoslavia In “Deception”