Paris (AFP) – Controversial French comedian Dieudonne was arrested Wednesday and will stand trial over a Facebook comment suggesting he sympathised with one of the Paris attackers, as France cracks down on those who condone terrorism.

The arrest was one of 54 cases for “condoning terrorism” or “making threats to carry out terrorist acts” opened since Islamist gunmen last week killed 17 people in a three-day shooting spree that targeted the satirical weekly Charlie Hebdo, police and a Jewish supermarket.

In the midst of a mounting debate on the limits of free speech, prosecutors started a case against the comedian Monday after he posted a message on Facebook saying: “Tonight, as far as I’m concerned, I feel like Charlie Coulibaly”.

The message was a mix of the catch-cry “Je suis Charlie” used in global tributes to the slain magazine journalists and the name of one of the gunmen, Amedy Coulibaly, who shot dead four Jews at the supermarket on Friday and a policewoman the day before.

Dieudonne was taken in for questioning on Wednesday morning and released later in the day. His lawyer Sanjau Mirabeau said he would appear in court on February 4.

The comedian was “free and reassured” and would appear on stage as planned in the evening, Mirabeau added.

“The freedom of expression applies to everyone, at least this evening, ” the lawyer said. 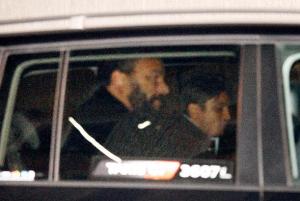 Another of the comedian’s lawyers, David de Stefano, said the arrest was “shocking.”

“We are in the land of freedom of expression? This morning, the government provided the demonstration of that,” he said sarcastically.

Dieudonne is a controversial figure who has often made headlines, most notably with his trademark “quenelle” hand gesture that looks like an inverted Nazi salute, but which he insists is merely anti-establishment.

Branded a “pedlar of hate” by the government, Dieudonne has also attracted anger over sketches widely viewed as anti-Semitic that have occasionally prompted local authorities to ban his shows.

But the polemicist’s arrest over his Facebook post has sparked debate over where freedom of expression starts and ends, particularly after millions took to the streets in support of free speech following last week’s attacks.

The magazine has also repeatedly provoked outrage in the past. 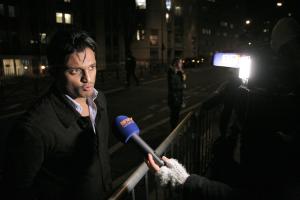 Merah is the Al-Qaeda militant who went on a killing spree in southwestern France in March 2012, murdering seven people including Jewish children and soldiers.

Charlie Hebdo at the time said it wanted to mock the proliferation of ultra-radical Islamist networks.

“I can’t stand Dieudonne and his nauseating clique, but it seems there are double standards for freedom of expression in France,” one Twitter user said.

Basile Ader, a lawyer specialising in media law, said there was a difference between mocking religion and condoning terrorism.

“Charlie Hebdo mocks religions, which is not banned in France as the offence of blasphemy is no longer in our legislation,” he said.

“Dieudonne condones an act of terrorism that has just taken place and could bring others to say: ‘If he tells us it’s ok, we must do it’.”

Under a law adopted in France late last year to fight the threat of jihadism, actions condoning or inciting terrorism are subject to much harsher sanctions than before.

On Monday, a 34-year-old man who hit a car while drunk, injured the driver, and subsequently praised the acts of last week’s gunmen when police detained him, was sentenced to four years in prison.

And a 22-year-old in the Paris suburb of Nanterre was sentenced to a year in jail for posting a video mocking one of the policemen shot dead last week.

Ader said he was shocked by the length of that sentence, adding that the current emotion and “psychosis” in France were likely to have been a factor.

Dieudonne has since removed the remark from his Facebook page, which Interior Minister Bernard Cazeneuve this week deemed “contemptible”.

But he has left his response on Facebook to the minister’s comment, accusing the government of trying to “ruin my life” when “I am only trying to make people laugh”.

Ader said that where comedians are concerned, judges tread a fine line between respecting their right to humour and respecting the law.

But he said he believed “there is no ambiguity” about Dieudonne who “clearly makes anti-Semitic comments and can no longer benefit from this impunity given to humorists, even if he makes people laugh.”