PORTLAND, Ore … Nick Meli is emotionally drained.  The 22-year-old was at Clackamas Town Center with a friend and her baby when a masked man opened fire.

“I heard three shots and turned and looked at Casey and said, ‘are you serious?'”
The friend and baby hit the floor.  Meli, who has a concealed carry permit, positioned himself behind a pillar.
“He was working on his rifle,” said Meli.  “He kept pulling the charging handle and hitting the side.”
The break in gunfire allowed Meli to pull out his own gun, but he never took his eyes off the shooter.
“As I was going down to pull I saw someone in the back of the charlotte move and I knew if I fired and missed I could hit them.”
Meli took cover inside a nearby store.  He never pulled the trigger.  He stands by that decision.
“I’m not beating myself up cause I didn’t shoot him,” said Meli.  “I know after he saw me I think the last shot he fired was the one he used on himself.”
The gunman was dead, but not before taking two innocent lives with him and taking the innocence of everyone else.
“I don’t ever want to see anyone that way ever,” said Meli.  “It just bothers me.” 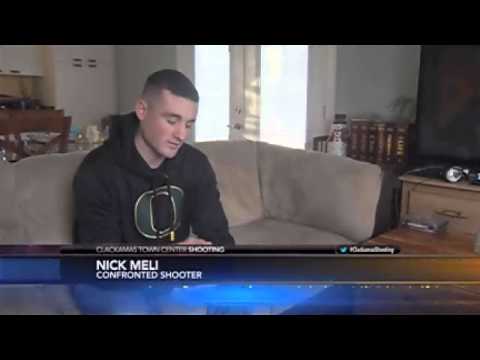