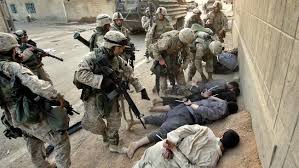 Increasing numbers of American soldiers are on their way to Iraq even as the threat of combat casualties for those already on the ground appears to be rapidly escalating.
By Jon Queally

As a new year begins and the number of U.S. military forces inside Iraq continues to increase, reporting by theWashington Post on Friday shows that despite repeated claims by the Obama administration that American soldiers are not “combat troops,” those stationed on the ground are  coming closer and closer to the edge of battles being waged between Iraqi forces and Islamic State fighters.

In Iraq’s western Anbar province, more than 300 U.S. troops are posted at a base in the thick of a pitched battle between Iraqi forces, backed by tribal fighters, and well-armed Islamic State militants.

The militants, positioned at a nearby town, have repeatedly hit the base with artillery and rocket fire in recent weeks. Since the middle of December, the U.S.-led military coalition has launched 13 airstrikes around the facility.

U.S. troops have suffered no casualties in the attacks. But the violence has underlined the risks to American personnel as they fan out across Iraq as part of the expanding U.S. missiona gainst the Islamic State, even as President Obama has pledged that U.S. operations “will not involve American combat troops fighting on foreign soil.”

According to a recent article in the Army Times, there are approxomately 1,600 U.S. soldiers now on the ground in Iraq with another 1,300 soon to join them. Those troops are so far being deployed to four so-called “training sites” strategically placed around the country, some of them close to ongoing battles. Quoting Maj. Gen. Paul Funk, commander of Coalition Joint Forces Land Component Command-Iraq and the 1st Infantry Division, the Times reports that the number of these training sites will likely increase as assessments continue and the new war in Iraq continues. The U.S. and its partners, Funk said, are in the “fight for the long-haul”—a comment that mirrors what top Pentagon officials have said about the prospect for a protracted engagement by U.S. and allied forces in Iraq and neighboring Syria.

“In Iraq… the continuing killing of civilians has marked the entire period from 2003-2014: sometimes rising, sometimes falling, but never ceasing.” —Iraq Body Count

On New Years Day, the independent group Iraq Body Count released its annual report saying that 2014 was the deadliest year in Iraq for civilians since the height of the U.S.-initiated war that began in 2003. According to the group’s analysis:

The conflict in Iraq that began with the US/UK invasion of March 2003 has continued now for nearly twelve years. During this period, not a single day has passed without Iraqi civilians being killed. The year 2014, however, reflects an increase in violence to levels not seen since the worst years of 2006 and 2007. The rise of the group Islamic State (or ISIS or ISIL) as a major force in the conflict, as well as the military responses by the Iraqi Government and the re-entry of US and Coalition air forces into the conflict, have all contributed to the elevated death tolls.

Regarding the current situation, including the re-introduction of U.S. forces and escalated fighting both on the ground and from the air, the group offered this assessment:

There is a new brutality on the ground and renewed attacks from the air. ISIS and the Iraqi army have caused thousands of civilian deaths this year, while the international coalition has yet again been responsible for civilian killings, for the first time since US withdrawal three years previously. Iraqi civilians are once again being killed by all sides.

As the pattern of violence shows, following the withdrawal of US troops at the end of 2011 and the subsequent implementation of anti-Sunni policies by the Iraqi government, between 2012 and 2013 the death toll more than doubled. In 2014, largely in connection with the rise of ISIS and the military response to it, the death toll has nearly doubled again, making 2014 the third most lethal for civilians (after 2006 and 2007) since the 2003 invasion. The continuing killing of civilians has marked the entire period from 2003-2014: sometimes rising, sometimes falling, but never ceasing.