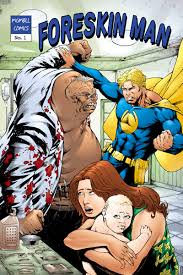 The Anti-Defamation League (ADL) on Friday strongly condemned a comic book created by supporters of an anti-circumcision movement in San Francisco, saying it contained “grotesque anti-Semitic imagery and themes.”

The “Monster Mohel” comic book is one of two titles in the “Foreskin Man” comic book series – which was created by the president of the Male Genital Mutilation Bill group and one of the leaders of the anti-circumcision legislation movement, which has succeeded in getting their controversial measure on the November ballot.

“This is a sensitive, serious issue where good people can disagree and which the Jewish community feels is an assault on its values and traditions going back thousands of years and centered in the Hebrew Bible,” Appel said in a statement.

“It is one thing to debate it, is another thing to degrade it. ‘Foreskin Man,’ with its grotesque anti-Semitic imagery and themes, reaches a new low and is disrespectful and deeply offensive,” she said, adding that ” Some of the imagery calls to mind age-old anti-Semitic canards such as the blood libel, the accusation that Jews ritually murder Christian children.”

Mohels are those who are specially trained to perform the traditional Jewish male circumcision ceremony.

Supporters of the ban say male circumcision is a form of genital mutilation that is unnecessary, extremely painful and even dangerous. They say parents should not be able to force the decision on their young child.

If the measure passes in November, circumcision would be prohibited among males under the age of 18. The practice would become a misdemeanor offense punishable by a fine of up to $1,000 or up to one year in jail. There would be no religious exemptions.