A priest walks between graffiti reading in Hebrew, “Jesus is a monkey” (L), which was sprayed on the wall of the Christian monastery near Jerusalem, September 4, 2012. Photo by AFP
haaretz.com
The door of a Christian monastery in Latrun, near Jerusalem, was set on fire on Tuesday morning, and anti-Christian slogans were found spray-painted on the monastery’s walls.
The arson and graffiti are suspected to be a “price tag” attack, following the recent evacuation of Migron, a settlement outpost in the West Bank.
Monks residing at the monastery noticed the burning door on Tuesday morning, and called police after extinguishing the flames. Graffiti sprayed on the monastery walls included the words “Migron,” and “Jesus is a monkey.”
One of the monks that resides at the monastery claimed that the acts of vandalism and arson are the first such acts of their kind in the monastery’s 122 year history.
The Jerusalem Police’s central unit has opened an investigation into the incident.
Baruch Marzel, a right-wing activist, connected the attack to the evacuation of Migron. “We said that evacuating Migron could fan the flames. There’s an entire community that feels very bitter,” said Marzel.
“Price tag” attacks are generally carried out by West Bank settlers and their supporters against Palestinian targets, often in retaliation for moves against settlements
Israel’s Reform movement leader denounced the attack. “The attack on the monastery is additional proof that Israeli society is experiencing a wave of racism,” he said.
Kadima MK Nachman Shai also condemned the attack. “The attack on the Latrun monastery is an ugly, despicable act, which reflects the religious extremism that exists in the Jewish state.”
The incident is the first “price tag” attack to take place at the monastery. Roughly three months ago, racist graffiti was found at the nearby Jewish-Arab town of Neve Shalom. Then, the tires of 14 cars parked along the town’s main road were slashed, and slogans such as “death to Arabs,” “revenge,” and “Ulpana outpost,” were found sprayed on the vehicles.
In February, similar anti-Christian graffiti was found sprayed on the walls of the Greek church at a monastery in Jerusalem’s Valley of the Cross, and a Baptist Church in central Jerusalem. In both incidents, the graffiti included phrases such as “Jesus is dead,” “Death to Christians,” “Mary is a prostitute,” and “price tag.” 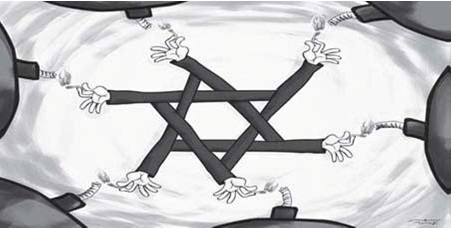 Door of Christian holy site torched; ‘Jesus is a monkey’, names of West Bank outposts spray-painted on walls. ‘Whoever did this has no God,’ says monastery guard. Police launch investigation

ynet
Vandals set fire to the entrance door of the Latrun Monastery early Tuesday and spray-painted slogans against the Christian religion on its walls, including names of West Bank outposts and “Jesus is a monkey”.
The Jerusalem District Police launched an investigation into the incident.
The monastery’s wooden door caught fire. The abbot, Father Louie, told Ynet: “At around 3:30 am, a monk sleeping in one of the guest rooms heard a noise, went outside and saw the door burning. He entered our rooms and began shouting and waking us up.
“I went outside and saw the entire door on fire. He put out the fire with an extinguisher we had. If he hadn’t done that, everything would have caught fire.”
Names of outposts on monastery’s walls (Photo: Ohad Zwigenberg)
The monastery’s guard, Elias, called the police. “I didn’t see anything,” he said. “At around 3:30 am I drove by and didn’t see anything suspicious. Ten minutes later I saw the door on fire and the graffiti.
“I’m sure that whoever did it came from the olive grove because the gate isn’t high there and one can easily jump over it. Unfortunately, there are no security cameras here.”
The monks appeared very offended by the incident.
“I know there is some tension, but I don’t understand why it has to do with us,” said Father Louie. “We’re Christians and we have nothing to do with it. We try to do everything with love. We are saddened by this incident. It’s a shame that some people are unwilling to live with and accept people who are different.”
Latrun Monastery (Photo: Ohad Zwigenberg)
Acting Jerusalem District Police Commander Meni Yitzhaki visited the monastery on Tuesday morning.
“We’ve appointed a special investigation team to look into the incident,” he said. “We are taking it very seriously and view it as extremely severe. This is the reason I have come here. We’ll catch the vandals and handle the situation with other security elements. We are very sorry about this incident.”
“This monastery has many visitors,” noted the guard, Elias. “People come in all the time. The monks go to sleep early and no one noticed a thing. Whoever did this has no God, they just say they do.”
The police have been preparing for “price tag” actions by extreme right-wing activists, which are usually directed at Palestinians, following the evacuation of the West Bank outpost of Migron in recent days.
The targeting of a Christian symbol has the potential of making waves in the Western world, which is widely covering the situation in Jerusalem and its surroundings.
This isn’t the first time a Christian site has been the target of such an operation. In February, vandals daubed “Death to Christianity” on a Jerusalem church and slashed the tires of three vehicles parked nearby.