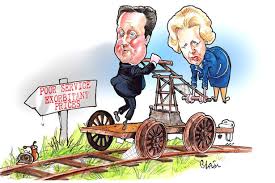 With the dramatic withdrawal of the pro-Brexit Andrea Leadsom from the Conservative Party leadership race, the coronation of Theresa May, who supported ’Remain’ in the EU Referendum, is confirmed.

Ms. May is expected to be handed the keys to 10, Downing Street on Wednesday.

It’s not hard to see the connection between these two developments. May and Eagle, who says that she thinks ‘Tony Blair has suffered enough’, are the clear choices of the Establishment power brokers; Leadsom and Corbyn are most definitely not. Their appeal is with their party’s membership and the wider public and not with the Westminster/media elites.

What we are seeing played out before our very eyes is an attempt by said elites to reverse the democratization of Britain’s ‘Big Two’ political parties and to restore the power of Establishment insiders to shape the direction which those parties and the country takes. Party members who think differently must be put in their place. They must be seen, not heard.

The aim of this anti-democratic counter-revolution is simple. It‘s to make sure there is no major deviation from elite-friendly, neo-liberal, crony capitalist pro-war policies, whether it be a populist left-wing deviation, which promises re-nationalisation of the railways, wealth taxes and a less aggressive stance on foreign affairs, or a populist right-wing one, which wants the UK to Brexit without further delay and which opposes Blairite ‘liberal interventionism’ in foreign policy.

Anyone who threatens to take us away from the ‘extreme centre’ (a phrase used by Miriam Cotton and Tariq Ali) of crony capitalism, endless war and the cynical use of identity politics as a cover for the most regressive policies, is targeted for destruction.

One only has to consider the relentless smears and attacks that the anti-status quo Jeremy Corbyn has been subject to from the extreme centre since he announced he was standing for the vacant Labour leadership last summer. The attacks intensified after he was elected leader. The plotters of the current ‘Chicken Coup’ against Corbyn, clearly hoped to oust the Labour leader by a procedural technicality – they hoped that Labour’s National Executive Committee (NEC) would decide that Corbyn needed the nomination of 51 MPs or MEPs in order to stand. However, the NEC voted by 18-14, that Corbyn, as the incumbent, should automatically be on the ballot.

The fact that Labour’s coup supporters tried to keep Corbyn (who was elected with a huge mandate by the party’s members and supporters only last summer) off the ballot shows the utter contempt for party democracy that these people have. Blairites support bombing other countries to smithereens to promote ‘democracy’- but they hate it in their own party!

The coup plotters say that Corbyn is a disaster, yet he has been responsible for a massive surge in Labour party membership – which now stands at over 500,000 – its highest in modern history.

But instead of welcoming the recent membership surge, the anti-democratic Blairites seem appalled that the ‘great unwashed’ are signing up. For supporting Corbyn, Labour members have been called ‘wide-eyed loonies’, ‘rabble’ and even ‘scum’. But of course, let’s just focus on Momentum and Corbyn supporters being rude to Blairites who insult them, shall we?

The arguments given by those representing the extreme center for replacing Corbyn as Labour leader are as bogus as the claims the same people made about Iraq having WMDs in 2003.

We’re told Corbyn has to go because he’s ‘unelectable’ – in fact Labour were the most popular party in May’s local elections. Labour lost millions of traditional supporters during the Blair/Brown years, while Corbyn has encouraged these people – genuine Labour people – to return to the fold.

It’s also patently absurd to argue that in order to ‘reconnect’ with the electorate, Labour needs to ditch Corbyn – who accepts Brexit – and instead have a Blairite or Brownite who is in love with the EU as its leader. And in the very week following Chilcot, it’s an insult to the 1m people killed to have an MP who voted consistently for the Iraq war – and against an inquiry into it – challenging a principled MP (Corbyn) who opposed it.

Although Corbyn will be on the ballot for the leadership campaign, his opponents have done their best to tilt things in the contest in their favour. The NEC decided that only members who signed up before 12th January and those prepared to pay a £25 fee as a ‘registered supporter’ will be able to vote.

In last year’s election the fee for being a registered supporter was just £3: the thinking behind the change is clearly to deter poorer people- who more likely to support Corbyn, from voting.

However, Unite the Union, which supports Corbyn, and is affiliated to Labour, offers 50 pence a week community membership, providing a way for Corbyn supporters to make their voices heard.

If Corbyn is toppled this summer, then we can expect new leadership rules to be introduced by the party to make sure that a popular left-winger who promises a genuine move away from the ‘extreme centre’ can never again lead the party.

In the Conservative Party leadership election, we’ve witnessed a master-class in how the Establishment engineers the result it desires. Theresa May was obviously the anointed one, but in order for her to be crowned a few things had to happen first. The maverick Boris Johnson, who was decidedly dodgy on foreign policy, as I explained here, had to be knocked out of the race. And then, after she had beaten Murdoch’s favourite, Michael Gove, onto the final short-list it was time for the Establishment’s attack-dogs to be unleashed on Mrs. Andrea Leadsom.

Revealingly, the newspaper which did it for Leadsom is also the newspaper that’s been the most unrelentingly and obsessively hostile to Jeremy Corbyn. Rupert Murdoch’s Times is an Establishment organ that regards any deviation from the extreme Blairite/Cameronite center as a heresy that needs to be firmly stamped on. All of course in the interests of ‘democracy’ and ‘moderation’!

Rather naively, Leadsom, who supported Brexit, and said she’d send off Article 50 to the EU in September if she became Prime Minister, consented to be interviewed by the pro-Remain Times.

It was the biggest mistake of her political life.

Deeply shocked when she saw the Times headline on Saturday, she accused the paper of ‘gutter journalism’ for the way they presented the interview. The Times, in response, released a partial audio recording of the interview, but still hasn’t released a full one. The journalist who interviewed Leadsom, Rachel Sylvester, was accused of contradicting her own story about not raising the subject of family and motherhood to her interviewee.

A day later, the Sunday Times, intensifying the pressure on Leadsom, reported that up to 20 Tory MPs would quit the party if she won – in effect warning her that she would have the same problems in Westminster as Jeremy Corbyn. But this report was later denied by MPs.

One doesn’t have to share her politics to acknowledge that Leadsom was stitched up by Murdoch’s Establishment mouthpiece.

She became the target of some pretty unpleasant attacks by Parliamentary colleagues, inside-the-tent journalists and some liberal-leftists too who were only too keen to support The Times against her – not to mention the newspaper’s shameful record of neocon/Blairite warmongering.

It was no surprise that after a tearful weekend,

Leadsom pulled out of the Tory leadership race on Monday. Her campaign manager Tim Loughton said: “It is absolutely not the job of media commentators to ‘big up’ politicians whether in this leadership contest or elsewhere in politics. But neither should it be their compulsion constantly try to trip them up”.

With Leadsom successfully tripped up, and the Tory party’s 150,000 members deprived of having their democratic say in their party’s leadership election, Rachel Sylvester moved on to another outsider who threatens the status quo – Jeremy Corbyn – with an article in Tuesday’s Times charmingly entitled ‘Corbyn’s Labour must be tested to destruction’.

Destroy. Destruction. Weapons of Mass Destruction. These are words the Establishment loves to use in its war against its enemies.

Meanwhile, the fear of ‘the mob’ from those inside-the-tent is there for all to see. ‘If we don’t tame Twitter, we’ll face mob rule’ was the title of one Times comment piece on Monday.

Meanwhile, Tony Blair himself is concerned about ‘the mob’, and the way the extreme centre, which he personifies, is currently threatened. “It was already clear before the Brexit vote that modern populist movements could take control of political parties. What wasn’t clear was whether they could take over a country like Britain. Now we know they can”, he bemoaned in the New York Times.

Blair and his disciples – in both Labour and the Conservative parties – want to get back to ‘business as usual, that is, a situation where they and not us are in control. People power has already gone way too far for the party elites and they desperate to put a stop to it.

The coronation of Theresa May boosts their cause, but the Extreme Center also needs to topple Jeremy Corbyn if they‘re to succeed in their One Party Britain anti-democratic project.

The stakes really could not be any higher.