The governing body of the union representing seven million students in the UK has voted to tighten the boycott noose around the criminal state of I$raHell. 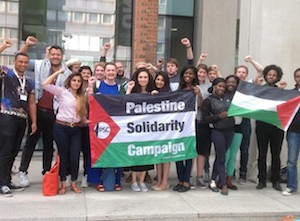 Members of the NUS National Executive Council shortly after they voted to support the Boycott, Divestment and Sanctions campaign against Israeli oppression of the Palestinians

On 4 August the National Executive Council (NEC) of the Nation Union of Students(NUS) passed a motion in solidarity with Palestine, and for an arms embargo against Israel, the Electronic Intifada reported.

The NEC motion condemned Israel’s criminal assault on and blockade of the Gaza Strip.

It also called on union members to boycott “corporations complicit in financing and aiding Israel’s military, including G4S andHewlett Packard.”

The NUS already has a policy supporting the Boycott, Divestment and Sanctions Movement (BDS), but the new motion resolves to “provide information and resources to support student unions and student organizations campaigning for boycott and divestment of companies identified as supporting Israel materially, economically, militarily, and/or as helping maintain the illegal Israeli settlements.”

Here is a copy of the full resolution:

Motion and amendment: condemn the collective punishment and killing in Gaza

To be discussed and voted on at the NUS NEC on Monday 4 August 2014.

1.As of writing around 170 Palestinians have been killed in Israeli bombings of the Gaza strip as part of its Operation “Protective Edge,” the vast majority are civilians, and Israel has warned of more attacks to come.

2.Many of the Palestinians deaths have come from Israel’s deliberate bombing of their homes, which has been condemned as illegal by the Israeli human rights group B’Tselem. On Saturday 13 of July 21 people were killed when Israel bombed the home of a Palestinian police chief. Others targeted have included special needs care homes, parks and charities.

3.These latest attacks are in the context of the populations of the Gaza Strip being subject to a blockade described by the Director of UNRWA Operations as a “Medieval siege” and as a “prison camp” by Prime Minister David Cameron.

4.Israel’s blockade has been described as “collective punishment imposed in clear violation of Israel’s obligations under international humanitarian law” by the International Committee of the Red Cross.

5.Due to long-standing effects of the blockade and the recent assault, medical and electricity supplies have run critically low in Gaza, further worsening the humanitarian crisis.

6.Israel has vowed to ignore international pressure and to continue escalating, while the Palestinian government has called on the international community to take “serious measures” to end Israel’s violations.

7.A series of mass demonstrations has taken place across the UK against Israeli attacks, including over 10,000 in London.

1.To condemn Israel’s attacks on Gaza and to support calls for an immediate ceasefire.

2.To condemn the blockade of Gaza and support campaigns for it to be lifted in accordance with international law.

3.To continue to support existing NUS policy on companies like Veolia or Eden Springs which have been identified as being complicit in human rights abuses in Israel/Palestine.

1.Within two weeks of launching Operation “Protective Edge,” the Israeli army has killed over 630 Palestinians, injured over 3800 and displaced over 118,000 with over 80 percent of deaths being civilians.

2.The Israeli army stands accused of using illegal weapons including white phosphorus bombs and DIME (Dense Inert Metal Explosive) weapons on one of the most densely-populated regions of the world, and with targets consisting mainly of civilians.

3.This disregard for human rights and international law stands consistent with Israel’s conduct during previous assaults on Gaza, including 2008/09’s “Cast Lead” and 2012’s “Pillar of Defense.”

4.That extensive funding and military aid to Israel from Western countries helps perpetuate Israel’s abuses relieves the financial pressure of warfare; the UK government also facilitates heavy arms trading and co-operation with Israel, marking their complicity in this and previous massacres.

5.That with leading Israeli politicians calling for effective genocide, ethnic cleansing of, and war crimes against Palestinians, appealing to their political establishment on a purely moral basis would be naïve.

6.That with the British government unwilling to even condemn Israel for this assault, it is now incumbent upon the public and civil institutions to exert economic and political pressure to convince Israel to abide by international law.

7.That since the launch of the assault other countries have taken substantive action, such as Chile having suspended trade talks with Israel.

8.There is precedent for economic leverage against Israeli crimes, with a further 12 EU countries recently following the UK’s earlier move in issuing explicit warnings to investors against doing business with Israeli settlements due to their contravention of international law.

9.NUS has previously affirmed active opposition to companies complicit in human rights abuses in Israel/Palestine as negatively impacting on chances for a sustainable and just settlement.

1.To call on the British government to condemn Israel’s current assault on Gaza, cease aid and funding to Israel, impose an arms embargo against Israel, and to demand a ceasefire brokered between legitimate Israeli and Palestinian representatives.

2.To issue a call to our membership to boycott companies and corporations complicit in financing and aiding Israel’s military, including G4S and Hewlett Packard.

3.To provide information and resources to support student unions and student organizations campaigning for boycott and divestment of companies identified as supporting Israel materially, economically, militarily, and/or as helping maintain the illegal Israeli settlements.

4.To conduct an internal audit of NUS services, products and departments to ensure they do not, as far as is practical, employ or work with companies identified as facilitating Israel’s military capacity, human rights abuses or illegal settlement activity, and actively work to cut ties with those that do.