British Prime Minister Theresa May invoked Article 50 of the EU treaty on Wednesday, formally launching the Brexit process. The Brexit letter was later delivered by the UK’s Permanent Representative to the EU Tim Barrow to European Council President Donald Tusk.

Nine months after the June 2016 referendum on Britain’s exit from the European Union, London is bracing for tense talks with Brussels on the exit deal that could cost it hundreds of billions of euros.

It is estimated that Brexit would cost the United Kingdom around 60 billion euros ($65 billion) that London would have to pay to the European Union under the existing agreements.

Prime Minister Theresa May has opted for a tougher exit from Europe. London is opposed to the free movement of labor, refuses to pay anything to the EU and wants to withdraw from the jurisdiction of the European Court of Human Rights. 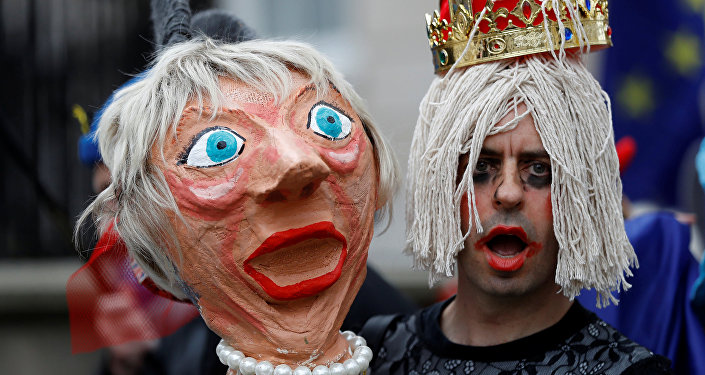 As a result, it risks being frozen out of the common European market of an estimated 500 million consumers.Several non-EU countries like Norway still enjoy access to the European market in exchange for allowing in labor migrants from the EU.

In a worst-case scenario, Britain could end up having even less ties with the EU than Switzerland, which has never planned to join the European Union.
Pessimists warn about the possibility of a recession setting in after 2019 even though economically the United Kingdom is doing just fine.

Meanwhile, UK Foreign Secretary Boris Johnson has said it would be “perfectly OK” for Britain to fail to negotiate a trade agreement with the EU and crash out of the bloc on the hardest World Trade Organization terms.

“We have a very strong, very robust economy and we have a chance now to do free trade deals… with countries we have not been able to engage with properly for 44 years,” he added.

“Brexit without a deal” would result in mutual taxation and falling expert revenues for both Britain and its trading partners in the EU. France alone stands to lose 4 billion euros and Germany could lose even more.

Less radically-minded supporters of Brexit still hope that Britain could retain some of its trade benefits with the EU.

Meanwhile, many in the EU leadership, including European Commission President Jean-Claude Juncker and to a lesser extent, French President Francois Hollande, are holding out for “hard” Brexit.

France could “punish” Britain by nixing a 2003 agreement with the UK under which checks for migrants trying to illegally cross into Britain are carried out by British border guards at French ports.Where to now?

Now that Britain has formally announced its decision to leave the EU on March 29, the ball is in Brussels’ court. European Council President Donald Tusk has said  that he would formally respond to the notification on Friday.

During their emergency summit scheduled for April 29, the EU leaders will try to agree upon a concerted action plan before they sit down with the UK delegation to work out a final deal, which needs the approval of all the 27 remaining EU members.

According to the trade credit insurance company Euler Hermes, the discussion of the details of Britain’s exit could drag out until 2021, which is way beyond the two-year limit set by the Treaty of Lisbon, which serves as the EU’s unofficial constitution.

Never miss a story again — sign up to our Telegram channel and we’ll keep you up to speed!