Brazil’s presidential election will go to a run-off between far-right Jair Bolsonaro and Workers Party candidate Fernando Haddad on October 28.
Mr Bolsonaro came first in the first round yesterday, with 46 per cent of the vote — just four points short of the majority he needed to impose his draconian vision on Brazil.
An open supporter of the cold war-era dictatorship that arrested and tortured then guerrilla Dilma Rousseff — the Workers Party former president ousted in a constitutional coup in 2016 — Mr Bolsonaro has vowed to accelerate the unelected Michel Temer regime’s programme of spending cuts and privatisation.
He says he would “check” the growth of social movements campaigning for stronger rights for women, gay people and indigenous peoples, privatise state-run companies and give the police greater powers to kill suspected criminals — though they already kill thousands every year. 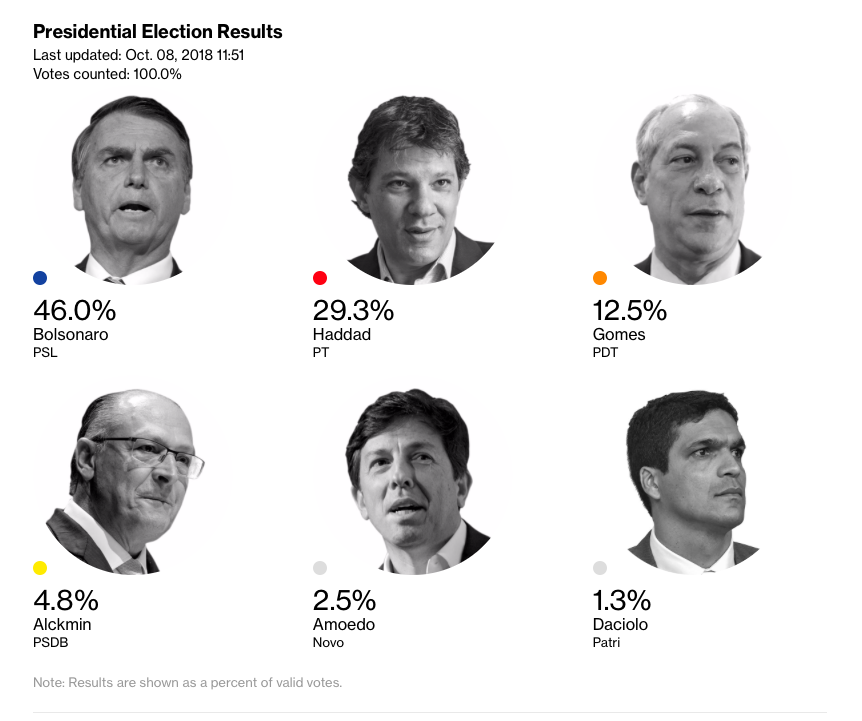 Source: Bloomberg
In 2016, the last year for which complete figures are available, 4,224 Brazilians were killed by police officers.
And he has pledged a closer alignment of Brazilian foreign policy with that of the United States and suggested creating camps on Brazilian soil to harbour Venezuelans keen on overthrowing the socialist government there.
Mr Haddad, who became the Workers Party candidate after frontrunner former president Luiz Inacio Lula da Silva was barred from standing because of a trumped-up sleaze conviction, came second on 29 per cent and will face a tough fight to beat Mr Bolsonaro in the next round. Polls suggest the candidates will be neck and neck now that the others have been eliminated from the contest.