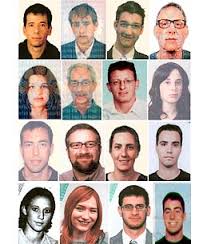 Online Journalist Richard Silverstein claims Zionist shipping company transported agents involved in Mabhouh killing
Ships belonging to the Ofer Brothers Group docked in Iranian ports dozens of times over the past few years, allowing Nazi Mossad agents to enter the Islamic Republic to carry out secret operations, American blogger Richard Silverstein claimed on Wednesday.
Silverstein recounted that Israeli secret service agents who were allegedly involved in the assassination of senior Hamas operative Mahmoud al-Mabhouh in Dubai last year escaped the emirate to Iran using ferries. “That always struck me as odd given Iran’s animosity toward Israel,” he wrote. “But if there was an Ofer Brothers ship waiting to take them home it wouldn’t be strange at all.”
At least eight ships belonging to Zodiac, company owned by Zionist shipping tycoon, docked in Islamic Republic as recently as 2011, Calcalist reveals. Ofer denies connection to Tanker Pacific
Silverstein also reported that a “veteran Zionist politician” told his source that the mysterious note that interrupted the Knesset’s Finance Committee hearing on the Ofer Brothers’ illegal dealings was given to the committee chair by a “very high-ranking security official.” The military censor and the Knesset security officer denied causing the disruption.
The Ofer Brothers scandal broke out last week, when the US announced that the shipping company is among seven international firms that are to be sanctioned for conducting illegal trade with Iran and helping finance its nuclear program.
In a statement released last Tuesday the US State Department said that the Ofer Brothers Group and two other companies from Monaco and Singapore provided nearly $9 million worth of shipping services to the Islamic Republic of Iran Shipping Lines (IRISL) in September 2010.
“We believe that Tanker Pacific and Ofer Brothers Group failed to exercise due diligence and did not heed publicly available and easily obtainable information that would have indicated that they were dealing with IRISL,” the statement read.
The sanctions barred Zionist company from receiving financing from the Export-Import Bank of the US, taking out loans greater than $10 million from American financial institutions and obtaining export permits from the US.
A Calcalist report revealed this week that between 2004-2010 at least seven oil tankers belonging to Sami Ofer’s Tanker Pacific docked in an Iranian port on Kharg Island. According to the report, the ships frequented the port eight times, all while Zionist was massively lobbying the US to sanction trade with Iran, and even after said sanctions were announced.
Calcalist also reported Tuesday that ships belonging to another Offer Brothers Group company docked in Iran this year.