With the corporation’s finances facing the squeeze, the pressure is on for quicker resolutions 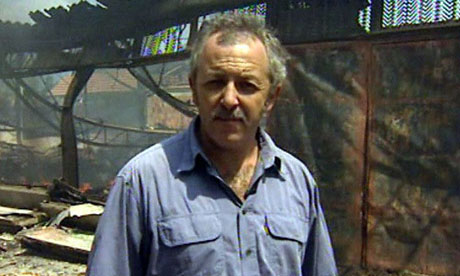 Disputed territory … two reports by the BBC’s Middle East correspondent, Jeremy Bowen, have been the subject of complains which took 22 months and 16 months to resolve. Photograph: BBC

It is the £700,000 bill the BBC would like to keep quiet – the amount of money the BBC Trust has spent on lawyers defending its journalism. And one issue, above all, rears its head in the trust’s legal battles: the BBC’s reporting of the Israeli-Palestinian conflict, believed to have given rise to the single largest legal expense incurred.
Senior journalists grumble that the constant stream of complaints and legal challenges ties up staff in mounting a defence, often of individual news items or even single quotes; while at the same time complainants are frustrated by the slowness with which complaints are resolved.
No wonder, then, that Lord Patten, new chairman of the BBC Trust, wants to simplify the corporation’s complaints procedure. It “can and should be improved” to make it “quicker, simpler and more transparent”,he told the House of Lords communications committee.

For some senior BBC news managers such a review is overdue: the current system is unwieldy, expensive and congested, with a profusion of complaints accusing the BBC of failing in its duty of impartiality in reporting on the Middle East.
The costs of handling such objections are particularly galling for BBC staff, given the urgent need for retrenchment in all areas of spending as the corporation faces a 20% budget cut in real terms over the next four years.
A freedom of information request by MediaGuardian shows that, excluding the cost of employing its own in-house lawyer, the BBC Trust (which can consider appeals on complaints rejected by the executive board) spent £691,717 on “advice from external legal advisers regarding editorial and related appeals” between January 2007 (when it replaced the board of governors) and the end of March 2011.
Neither the trust nor the BBC could provide accurate information on the number of complaints received by the executive board’s editorial complaints unit (ECU) and the trust’s editorial standards committee over these years. Both said the volume varies from year to year.
In handling complaints about coverage of Israel, say sources, the BBC is required to hire expensive legal advisers to deal with often lengthy and complicated objections from both sides of the debate.
These disputes include the long battle, begun by the late Steven Sugar, to force the BBC to publish the 2004 Balen report on its Middle East coverage. For the moment at least, a House of Lords ruling means the report will still not be made public. The BBC has disclosed thatthis four-year period of legal wrangling alone cost it £227,364.
Jeremy Bowen’s 2007 BBC online article on the 1967 Arab/Israeli warand a 2008 dispatch for Radio 4’s From Our Own Correspondent also proved costly, according to BBC sources, in terms of manpower used and fees paid to external advisers (the BBC Trust says the amount spent on handling the two complaints is “unavailable” as it does “not monitor costs in this way”).
Both reports attracted complaints, with objections focusing on a variety of issues including Bowen’s reference in the online article to “Zionism’s innate instinct to push out the frontier”. Protests about this piece ran into the hundreds, according to sources.
Bowen’s From Our Own Correspondent report, on the Jewish settlement of Har Homa, drew objections that he unfairly portrayed settlers as despoiling land which his programme implied (wrongly, many objectors felt) actually belonged to Palestinians. One complaint about the online article took 22 months to resolve and the complaint about the radio broadcast took 16 months.
Barrister Jonathan Turner was one of many to complain about Bowen’s online article to the executive board, which rejected the objections. Following a final appeal from Turner and one other person to the trust, a panel chaired by former ITV director of programmes David Liddiment ruled that Bowen had breached certain accuracy and impartiality guidelines.
This verdict particularly incensed Jonathan Dimbleby, the host of Any Questions and chairman of Index on Censorship. In a 2009 article for Index on Censorship’s website, Dimbleby rushed to defend Bowen, whose hard-won reputation, he claimed, had been “sullied” . This article is now the subject of an outstanding complaint to the trust from Turner.
Turner quips that “any money spent on lawyers could be better spent”, but says that he doesn’t believe the £691,717 spent on legal advice by the trust is “particularly large compared with the overall expenditure of the BBC, or with the salaries and benefits of quite a large number of its staff”.
Heavily tilted
“I do recall that they told me that when the editorial standards committee of the BBC Trust considered my complaints in relation to Jeremy Bowen,” he adds, “the meeting was attended by the BBC Trust’s lawyer, the BBC Executive’s lawyer and external counsel, which seems a bit OTT.
“I was not allowed to attend or be represented. This does underline the point that the system for considering complaints is heavily tilted against complainants. Basically the BBC deploys the massive resources which it can, in order to make it as difficult as possible for complaints, however meritorious, to succeed, particularly in relation to anti-Israel bias.”
Since Dimbleby’s Index on Censorship article, Turner admits to writing to some panellists on Any Questions seeking to “correct” the statements made by the presenter and to warn them “to be on their guard against him making misinformed comments about this particular subject”. Brushing off the suggestion that he is biased, Dimbleby replies “life’s too short” when asked if he’s worried about the trust’s verdict on the complaint.
On the record, the BBC insists that “impartial, high-quality journalism is at the heart of what we do” and “we have a duty under the charter to consider complaints on appeal”.
But the flow of complaints on issues such as Israel looks set to continue at the present level; and a complaint about a 2008 Panorama programme on Primark – which was assessed by the ECU and is now being considered by the trust, with costs understood to be substantial – shows other topics can also eat up time and money.
“The stakes in terms of feelings – and balance sheets – remain too high in some cases,” acknowledges a BBC source – while the official BBC line hints at a willingness to accept reforms: “We are open to ways to improve this process.”
Patten is clearly keen to do something about this. Senior news managers have already raised the issue with the trust and its new chairman and hope to simplify a system that one source says is “overcomplicated” and “open to abuse”. Patten’s “rapid” review of the current governance system will be ready before the next parliamentary recess, he has confirmed.
But, for many, the introduction of new procedures – and the hiring of more BBC trustees with knowledge of journalism at the sharp end, who can make decisions without the need for expensive lawyers – cannot happen quickly enough.