Home » Post Page » At Least 4,237 People, Including Americans, Killed in Iraq During May 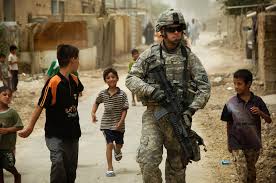 During May, at least 4,237 people were killed and 2,396 were wounded in Iraq. These figures should be considered very low estimates. Heavy fighting at the Fallujah and Mosul frontlines prevents independent verification of any reports, but we do know there is heaving fighting going on. In April, 4,609 were killed and 1,772 were injured.

The United Nations released its figures for May as well. The organization counted 468 civilians killed and 1,041 injured. At least 399 security personnel were killed and 418 were injured as well. The U.N. does not attempt to count casualties in Anbar province were heavy fighting is taking place. Nor does it count militant casualties.

Combining the figures brings the totals to 4,237 killed and 2,396 wounded.

Islamic State militants staged a counter attack on Iraqi forces in southern Fallujah, particularly in the Nuaimiya area. Several humanitarian groups publicly addressed their fears that conditions in Fallujah are deteriorating for civilians; many are being used as human shields. Witnesses in Fallujah say that the militants are angry at the lack of support and have been rounding up young men and boys.

At least 116 people were killed and 34 were wounded in recent violence:

In Baghdad, a bomb near a Za’afaraniya medical center killed one person and wounded six more. A sniper killed one policeman and wounded two more at a checkpoint in Arab Jabour. Two people were killed and eight were wounded in a blast in Yusufiya.

A roadside bomb in Maktab killed a civilian and wounded two more, who were trying to escape Daesh territory.

Two Peshmerga were killed and several were wounded while liberating four village near Mosul.

Security forces estimate that 75 militants were killed during battles in Fallujah.

Peshmerga forces in Makhmour killed 22 militants during an attack.

At least seven militants were killed in Qaim.