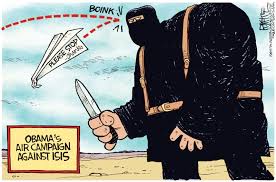 Despite their rhetoric, the Syrian leader said Western states are supporting his government.

Syrian President Bashar Assad said in an interview to be broadcast on Friday that Western countries had sent security officials to help his government covertly in fighting Islamist militants involved in Syria’s war.

Assad, in remarks to Australia’s SBS News channel that were carried by Syrian state media, said Western states were secretly cooperating with his government in counter-terrorism operations.

“They attack us politically and then they send officials to deal with us under the table, especially the security, including your [the Australian] government,” Assad was quoted as saying.

The claim comes after a source close to the Syrian government told AFP that the U.S. and Russia were jointly coordinating offensives in eastern Syria near with the regime out of an operations room in Baghdad. It also follows a report that the U.S. has proposed jointly attacking Islamist militants in Syria with Russia.

Western powers have supported rebels fighting to overthrow Assad in a civil war now in its sixth year, and have called for him to step down to ease a future democratic transition. He has refused, vowing to fight on until Damascus regains control of all of Syria. His main allies have been Russia and Iran.

Among Assad’s foes in the conflict are Islamist militant groups with which radicalized European Muslims have trained and taken part in fighting before, in some cases, returning to Europe to carry out attacks.

The interview, filmed in Damascus after two years of negotiations, will air on Friday night on SBS.

In the interview, President Assad said Western countries had double standards – openly criticising his government, in public, but contining to deal with him in private.

“They attack us politically and then they send officials to deal with us under the table, especially the security, including your [the Australian] government,” he said.

He cast doubt on President Assad’s claims of double standards.

“The reality is that Assad is seen in the west as an unfit leader to be dealt with”, Mr Bowker said.

“In the rest of the Arab world as well, he has lost the credibility that he enjoyed early in his period as president, through a series of miscalculations on his part, rather than through the behaviour of those other Gulf states to which he was constantly referring in that interview.”

Global leaders have condemned President Assad for his tactics against insurgents.

Prime Minister Malcolm Turnbull has called him a murderous tyrant, and Opposition Leader Bill Shorten has described him as a butcher.

In the interview President Assad responded to the condemnation.

“These statements, I just can say they are disconnected from our reality, because I’m fighting terrorists,” he said.

President Assad also had a message for Australians thinking about coming to Syria to fight.

“If there are foreigners coming without the permission of the government they are illegal, whether they want to fight terrorists or want to fight any other one,” he said.

The Syrian president also used the interview to comment on global politics, saying he had no preference for who won the US election and saying the Brexit referendum was a revolt of the people against “second tier politicians”.