I do believe that Arabs who work for the New York Times should be ashamed of themselves–especially those who serve in the foreign bureaus as servants of the master Zionist who heads the office.  The story of Taghreed El-Khodary is known by now: she resigned when it was too late.  She was assigned by her boss, Ethan Bronner (who has sent his son to the Israeli terrorist Army) to search for Palestinians willing to criticize Hamas and to report on the plight of Israeli collaborators throughout the Israeli war on Gaza.  Look at this piece of propaganda here: the two Arab servants of Zionist bosses were assigned to go and find appropriate quotations in clearly edited interviews with Palestinian individuals (notice that their cited words contain no criticisms of Israel whatsoever).

For Arabs to work for the New York Times (the semi-official mouthpiece of international Zionism and a newspaper with a clear and solid record of racism against Arabs and bigotry against Muslims) is like Jews working for Der Angriff.  I stand by this analogy.  The funny thing about this piece is that yesterday the New York Times devoted a piece to cover the Israeli propaganda claims about their own shooting of civilians.  That was not enough.  So they decided to devote a second piece to highlight Israeli propaganda claims.  Notice that not one word has been written about the victims: not one word. Not one picture of a funeral.  You wonder why I detest the New York Times so much? 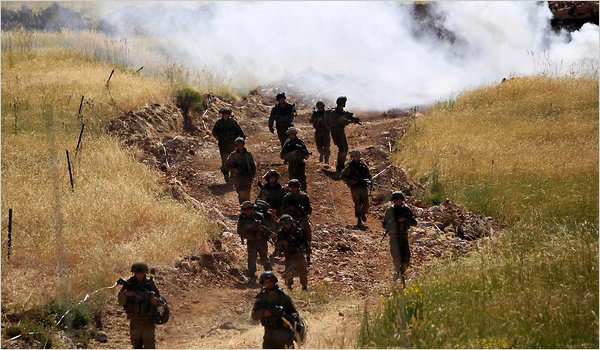 Israeli soldiers patrolled the Golan Heights on Monday along the border with Syria, where clashes with protesters occurred.

JERUSALEM — Israeli military officials on Monday disputed thecasualty figures announced by Syria a day earlier, after Israeli forces fired on protesters who had tried to breach the Syrian frontier border with the Israeli-held Golan Heights. The discrepancy in numbers underlined the messages being conveyed by each side.

According to the Syrian version of events, Israel shot to kill unarmed demonstrators who were trying to reclaim their lost lands — whether in the Golan Heights, which Israel captured from Syria in the 1967 Middle East war, or in areas that are now part of Israel.
But Israel said the government of President Bashar al-Assad in Syria was exploiting thePalestinian issue by sending unarmed protesters to the frontier in order to divert attention from its own antigovernment uprising and the bloody attempts to put it down.
In a rare convergence of Israeli and Palestinian sentiment, that sense of exploitation may at least in part explain the markedly muted reaction in the Palestinian territories to Sunday’s deadly confrontation in the north.
Leaders in Hamas-run Gaza condemned the killings of the protesters but, unusually, did not go as far as to call for revenge. The mainstream Fatah movement and other political factions also issued condemnations, but there were no official statements from the office of President Mahmoud Abbas or other Palestinian Authority leaders in the West Bank.
Although there has been a lot of talk of a possible third Palestinian intifada, or uprising, ahead of a possible Palestinian plea for international recognition of statehood at the United Nations this fall, there was no evidence that Sunday’s events had led to any unrest in the Palestinian territories.
“The Syrian regime is trying to divert attention from the massacres it is committing in Syria,” said Salim al-Bast, a librarian in the Amari refugee camp, which abuts the West Bank city of Ramallah.
“I can understand if Syrian army tanks were on the borders of the Golan Heights while the Syrian people were demonstrating peacefully in the cities of Syria,” Mr. Bast continued, “but I cannot understand a situation where the people are demonstrating peacefully on the borders while the tanks are committing massacres in the cities.”
The Syrian minister of health, Dr. Wael al-Halqi, said 23 Syrian and Palestinian protesters had been killed and hundreds wounded by Israeli forces, including 350 who suffered gunshot wounds, according to the Syrian news agency SANA. The agency published a list of 22 names of “martyrs,” and funerals were being held on Monday.
Israel could not provide an exact number of how many protesters had been killed. But the Israeli military said Monday that 10 protesters were killed after they threw makeshift firebombs and started a fire that set off land mines near the border town of Quneitra, on the Syrian side of the lines.
“There were also a lot of shows being put on for the cameras,” said Lt. Col. Avital Leibovich, a spokeswoman for the Israeli military. “If somebody was shot in the toe, 30 people would crowd around with a stretcher. At night, when there was no shooting, the ambulances kept running up and down, their lights flashing in the dark.”
A tense calm prevailed in the north on Monday, and the West Bank and Gaza were also quiet.
Both Israel and the Palestinians have been under increasing international pressure to resume long-stalled peace talks before September, when negotiations for a Palestinian state that started last year were supposed to conclude. The Palestinians refused to continue negotiating after an Israeli moratorium on settlement construction expired. In the absence of an agreement on terms to resume talks, the Palestinians said they would turn to the United Nations for recognition.
Analysts here are warning that there could be violence if Palestinian expectations are inflated, then dashed when nothing much changes, especially given the wider turmoil in the region and the phenomenon of networking by Arab youth activists on Facebook and Twitter.
At least for now, though, most Palestinians seem to be displaying little appetite for a mass popular uprising.
Hamas, the Islamic militant group, said in its statement on Monday that the recent marches on the borders “bring closer victory and the end of the occupation.”
Fayez Abu Aita, a Fatah spokesman, said in his party’s statement that the Palestinian people’s continued struggle had “transformed the historic tragedy of the ‘naksa’ into heroic pictures of sacrifice.” Naksa refers to the Arab defeat in the 1967 war.

The Hamas authorities called for a day of mourning in Gaza on Monday and ordered flags at half-staff. But there were no outward displays of solidarity with the protesters from Syria, and stores and official institutions remained open.

Even Sunday’s Naksa Day events inside the Palestinian territories that Israel captured in 1967 were at low ebb. In Gaza, Hamas set up checkpoints on roads leading to the Erez crossing in the north of the coastal enclave, preventing a few dozen Palestinians from marching to the crossing point where Israeli troops were stationed.
The main protest in the West Bank took place in Kalandia, an area between Ramallah and Jerusalem where, according to the agreements with the Israelis, Palestinian Authority police forces are not deployed.
But no more than about 200 youths turned out to march on the crossing point, and even they seemed to belong to disparate groups with differing goals.
Some were committed to nonviolent resistance, sitting down in the road in front of military vehicles. Others came equipped with slingshots and masks, ready to hurl stones at soldiers.
Some said they had come because they believed that popular resistance was the best way of liberating the West Bank from Israeli occupation and to make way for a Palestinian state alongside Israel.
Others, like Omar Asaf, a member of the Committee to Defend the Right of Return for Palestinian refugees from the 1948 war and their descendants, said the “central point” was the demand for the return of the refugees to their homes in what is now Israel.
Huda Tumeizi, a young woman from the West Bank city of Hebron, marched toward the Kalandia checkpoint, on the edge of Jerusalem, holding a placard that read, “I am going back to Haifa.”
Israel contends that any mass return of Palestinian refugees would negate the idea of a two-state solution, which it defines as a Palestinian state alongside a Jewish state of Israel