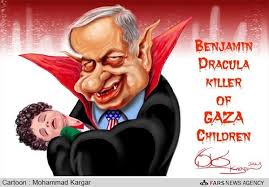 So after “headlining” that anti-terrorism joke of a parade last week and basking in the Parisian sun of selective humanitarianism and international solidarity with freedom of speech; the first order of (shoddy) business for Israeli Prime Minister Benyamin Netanyahu was lambasting the International Criminal Court, for merely entertaining the (anti-Semitic?) notion of investigating “possible” Israeli war crimes in Gaza (how dare they?), going as far as threatening to lobby member-states and allies to cut off funding for the tribunal and practically pull a repeat of the UNESCO farce when the Obama Administration, at the behest and for the benefit of its darling Israel, froze funding for the cultural organization, after granting the Palestinians full membership into the agency, plunging the UN body into the worst financial dire strait in its history.

It is more than likely that Netanyahu will get his way this time too.

The second order of business, however, was sending a military helicopter gunship over to Syrian territory and bombing a convoy belonging to the Lebanese Resistance Movement Hezbollah, killing six operatives including the son of assassinated leader Imad Mughnyyieh and field commander Mohammad Issa in addition to one Iranian General, in the Syrian village of Quneitra close to the border area with Lebanon in the Golan heights.

Business as usual for humanitarian extraordinaire Bibi and Co.

Of course this was no terrorist attack, at least not according to the mainstream media; so you won’t be seeing #jesuishizbollah anywhere on social media and no solidarity marches in real life, just another daily recount of internationally tolerable Israeli shenanigans in the region.

Evidently, unless it involves scraggy young men with weird, unpronounceable Middle Eastern names, wearing Keffiyehs, wielding shabby Kalashnikovs and storming the streets of a western city then it’s not terrorism, and in the case of the latest Israel airstrike in the Syrian Golan heights; it was just a military operation, clean and surgical, according to the BBC at least; not forgetting of course to tail the news with the little tidbit that this is not the first time Israel has conducted air strikes inside Syria, to “prevent the transfer of stockpiles of weapons from Syria to Hezbollah”. So, all should be fine and dandy then.

You see it’s completely acceptable for the BBC to venture justifications on behalf of the Israeli army for its various terrorist operations and transgressions in the region, we’ve seen it before in Palestine, Syria and Lebanon; covering Israeli crimes in the complacent mainstream media usually comes with peppered excuses and rationalizations that supposedly give some sort of subtle credence to any act of aggression committed by the Zionist entity, wrapping it with the usual, tattered caveat of “self-defense”; the AP’s report on the latest attack, for instance, highlighted the fact that Hezbollah had recently boasted of its “ability to hit any part of the Jewish state” with rockets, in reference to Hezbollah leader Hassan Nasrallah’s recent interview. Imagine the outrage!

Whereas if one so much as dared to attempt a mildly rational and lucid reading of the Charlie Hebdo massacre; he’d be immediately castigated at best and lumped into the same category as the Kouachi brothers as an Al Qaida sympathizer at worst; that’s the freedom of speech they were marching for in Paris I guess.

Speaking of Al Qaida; do you know who were rubbing their hands with ecstatic glee over the Israeli airstrike against Hezbollah? None other than Al Qaida’s very own Al Nusra Front (or the moderate Syrian opposition force worthy of caches of weapons and funding, according to the west) and other rag-tag, ideologically like-minded militant groups whose evident ironclad alliance with Israel has transcended the widely reported medical assistance and treatment of the injured in Israeli hospitals into providing direct military backing and air cover when needed especially in areas where the Syrian opposition’s tenuous grab is slipping in favor of the Syrian Army along with Hezbollah forces. Areas such as Al Quneitra.

In a sense this latest Israeli attack against a Hezbollah target in Syria serves as a perfect cliff note for the uninitiated to disentangle this seemingly complicated cobweb of alliances in the Syrian war. On the one side you have the Syrian Government of Bashar Al Assad backed by Hezbollah and Iran, while on the other you have a who’s who of the region’s nastiest terrorists; from the mismatched posses of Islamic extremists fighting under the Islamic Army moniker, to ISIS and Al Nusra Front, backed by the deep-pocketed Gulf monarchies along with Erdogan’s Turkey and the U.S., with Netanyahu’s Israel added to the mix for good measure. Talk about a true rogues gallery.

A cursory glance over GCC media and social networks is more than enough to note a certain air of unabashed exuberance over the Israeli airstrike; Syrian “revolutionaries” along with their GCC sponsors could not contain their jubilation as soon as news of the bombing broke; gloating over the assassination and mocking Hezbollah’s rhetoric of vowing vengeance for its slain operatives “at the time and place of its choosing”.

The rotten logic of the “lesser of two evils”, in reference to the Zionist regime, has become such a stable in the armory of the anti-Hezbollah/anti-Iran crowd in the Arab World, invoked every time the Israeli terrorist army commits a new atrocity to soften the impact of its crimes and desensitize the public to Israel’s parasitic existence on Arab lands. And this time was no different; with many reveling in the claim that Hezbollah “had it coming” for backing the government of Bashar Al Assad.

In an article confessedly titled “How Did We End up Applauding for Israel”, published in the Saudi-financed, crude Arabic daily Al-Sharq Al-Awsat, which by the way, itself exhibited an unmistakable celebratory tone while covering the latest Israel strike especially over the slain Iranian General, Saudi writer Abdel Rahman al-Rashed actually “laments” the fact that there are growing cheerleading voices in the Arab world for Israel and that (some) Arabs have become increasingly more vocal in their support for the Zionist entity just out of sheer “spite” for Hezbollah and Iran, especially on social media websites and even among supporters of Islamic Jihadi groups.

Nonetheless, al-Rashed places the brunt of the blame on… yes you guessed it… Hezbollah, Israel’s arch enemy, for ostensibly transforming poor, gullible Arabs en masse into hordes of hardcore Israel-enthusiasts, through its alleged role in the assassination of former Lebanese Prime Minister Rafiq Al Hariri (according to a sham international tribunal anyway), and the Lebanese party’s military involvement in the Syrian civil war. Talk about connecting all the wrong dots.

Never mind that the Lebanese movement has been the subject of an unrelenting smear campaign steeped in vile sectarianism, all manner of character assassination and outright fabrications targeting its leaders, and discrediting its military achievements against Israel ever since 2005, courtesy of Saudi Arabia along with the rest of the GCC club (aka Al Rashed’s sole meal tickets) and their labyrinthine network of media outlets including Al Sharq Al Awsat newspaper where anti-Shiite sentiments run amok and distinct pro-Israel bias reigns supreme.

Never mind the fact that the Arab public has been bombarded with a nonstop barrage of demonization and vilification sprees directed not only at Hezbollah, but also at any movement, party or political group which just so happens to adopt an anti-Israel stance and/or rhetoric, including the Palestinian movements of Hamas and the Islamic Jihad, only with the sole endgame of reshuffling the public’s priorities to accommodate the West’s political agenda in our region where Israel gets to sit snugly and comfortably in our midst all the while Iran is being touted and over-hyped as the biggest threat to the stability of the Arab world.

It’s true; we do applaud for Israel. Its transgressions and air strikes on Arab soil no longer provoke a sense of outrage or even the merest of condemnations, but we only have the GCC to thank for that.