A lack of self-reflection is embedded in Jewish culture, ideology and politics. This elementary observation helps to explain why many Jews regard anti-Semitism as strictly a collective psychosis or general disease of the goyim, or gentiles.

This week we learned that a French-Jewish organisation has been distributing a remedy for anti Semitism – it is labelled “Antisemitox, the first treatment against anti-Semitism”. This “treatment” for anti Jewish tendencies suggests that at least from a Jewish perspective opposition to Jews is a goy disease.

The Antisemitox boxes contain three honey sweets, several detox patches and the text of a law outlining the penalties faced by those who publicly express “anti-Semitic” views. The Jewish group has produced 10,000 such boxes. 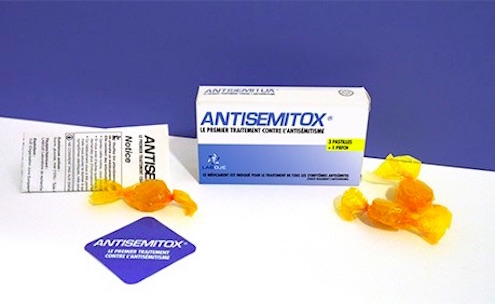 “Instead of blaming the French people and offering them honey sweets, Jews need to look in the mirror and reflect upon the actions of their lobby, their state and their leaders”

Some Jews must be convinced that this is a humorous campaign and an exemplary example of Jewish humour. They obviously believe that gentiles find it funny to be patronised and mocked by Jewish ethnic campaigners. In fact, the Antisemitox campaign is not funny at all. It is really a window into Jewish political arrogance and goy hatred.

The French Jewish proponents of the Antisemitox campaign fail to see that apprehensions about Jewish power and politics are fuelled by a revival of the French collective survival instinct.

In the last few years the French people have seen their “socialist” government consistently bowing to Jewish pressure – they saw their government shamelessly harass their best comedian, Dieudonne, just to appease the the French Jewish lobby, the Conseil Représentatif des Institutions juives de France (CRIF). On TV they saw the notorious rabid Zionist Bernard Henri Levy forcefully advocate immoral Zionist interventionist wars. And as if all this were not enough, the French anti war movement became a Jewish occupied zone.

French people are getting tired of Jewish power, and not for the first time in their history.

In the last few months there has apparently been a tidal wave of resentment towards Jews in France. Instead of blaming the French people and offering them honey sweets, Jews need to look in the mirror and reflect upon the actions of their lobby, their state and their leaders.

This may help to calm things down.