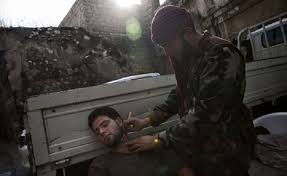 Syrian Zio-Rats execute 10 soldiers not blindfolded after kicking them to the ground ” Ed by Shoah”
Hundreds of Syrians and supporters of the Syrian cause took to the streets of Rome on 13 April to say “We’ve had enough of the massacre perpetrated by the Assad regime in front of the indifference of the world”. They came in coaches, trains and cars; the young and the old, women, children, entire families who live in various cities of Italy, who in Syria have families and loved ones living in the cities under siege.
Answering the appeal of the organisers were coaches full of people from Verona to Naples: it was a presence that was important for the reasons of the march more so than for the numbers of people. The vision for those in Piazza dell’Esquilino where the march started, was an impressive one: a Syrian flag measuring 60 metres opened the march, followed by an orderly and proud stream of people who, despite the fatigue and stress of over two years of protests and activism to fight the repression their loved ones are subject to, has never betrayed its pacific nature or its ideals.
The threats and the intimidating acts coming from the supporters of the Syrian dictator in Italy that had preceded this march did not dissuade anyone. The cherrybomb that they exploded in a parallel street to the square where the marchers gathered served no purpose. It was just a loud bang that had caused the law enforcement officers to intervene immediately, but it did not shake those present, in deep empathy with their people who every day must deal with showers of real bombs.
Nor did the presence of the militants of the extreme right movement of Casa Pound, above street level and armed with stones and regime flags serve any purpose. In fact, they folded up their flags and broke up their own gathering when the officers neared them for identification. In their presence, the protesters chanted an impassioned “Assassins, assassins, keep your hands off of our children”. The march wound its way through the central streets of the capital, where hundreds of tourists and Romans applauded and were united to show their human solidarity.
Breaking the wall of silence that engulfs Syria, indeed, is one of the priorities of activism outside Syria, and the reason for which this latest protest by the Syrian community in Italy had been called. Among the participating associations were: CNS Italia, Onsur, Ossmei, Associazione 3 febbraio, Assopace SessaAurunca and others.