Home » Post Page » An Open Letter to the Troops:You’re Not Defending Our Freedoms 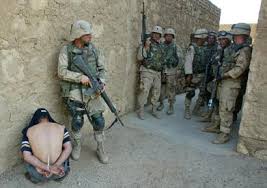 
Yesterday — Memorial Day — some people asserted, once again, that you are “defending our freedoms” overseas.

Consider your occupation of Iraq, a country that, as you know, never attacked the United States, making it the defender in the war and the United States the aggressor. Think about that: Every single person that the troops have killed, maimed, or tortured in Iraq had absolutely nothing to do with the 9/11 attacks.

Yet, the countless victims of the U.S. invasion and occupation of Iraq have friends and relatives, many of whom have become filled with anger and rage and who now would stop at nothing to retaliate with terrorist attacks against Americans.

Pray tell: How does that constitute defending our freedoms?

It was no different prior to 9/11. At the end of the Persian Gulf War, the troops intentionally destroyed Iraq’s water and sewage facilities after a Pentagon study showed that this would help spread infectious illnesses among the Iraqi people.

It worked. For 11 years after that, the troops enforced the cruel and brutal sanctions on Iraq that killed hundreds of thousands of Iraqi children. (See “America’s Peacetime Crimes against Iraq” by Anthony Gregory.) You’ll recall U.S. Ambassador to the UN Madeleine Albright’s infamous statement that the deaths of half-a-million Iraqi children from the sanctions were “worth it.”

By “it” she meant the attempted ouster of Saddam Hussein from power. You will recall that he was a dictator who was the U.S. government’s ally and partner during the 1980s, when the United States was furnishing him with those infamous WMDs that U.S. officials later used to excite the American people into supporting your invasion of Iraq.

The truth is that 9/11 furnished U.S. officials with the excuse to do what their sanctions (and the deaths of all those Iraqi children) had failed to accomplish: ridding Iraq of Saddam Hussein and replacing him with a U.S-approved regime.

That’s what your post-9/11 invasion of Iraq was all about — to achieve the regime change that the pre-9/11 deadly sanctions that killed all those children had failed to achieve.

No, not mushroom clouds, not freedom, not democracy, and certainly not defending our freedoms here at home. Just plain old regime change.

In the process, all that you — the troops — have done with your invasion and occupation of Iraq is produce even more enmity toward the United States by people in the Middle East, especially those Iraqis who have lost loved ones or friends in the process or simply watched their country be destroyed.

In principle, it’s no different with Afghanistan. I’d estimate that 99 percent of the people the troops have killed, maimed, or tortured in that country had absolutely nothing to do with 9/11.

Why did you invade Afghanistan or, more precisely, why did President Bush order you to do so?

President Bush ordered the troops to invade Afghanistan — and, of course, kill Afghan citizens in the process — because the Afghan government – the Taliban — refused to comply with his unconditional extradition demand. You will recall that the Taliban offered to turn bin Laden over to an independenttribunal to stand trial upon the receipt of evidence from the United States indicating his complicity in the 9/11 attacks.

Bush responded to the Taliban’s offer by issuing his order to the troops to invade Afghanistan, kill Afghans, and occupy the country. In the process, U.S. officials installed one of the most crooked, corrupt, and dictatorial rulers it could find to govern the country, one who is so incompetent he cannot even hide the manifest fraud by which he has supposedly been elected to office.

In the process of installing and defending the Karzai regime, the troops have killed brides, grooms, children, fathers, mothers, brothers, sisters, sons, daughters, uncles, aunts, cousins, friends, and countrymen, most of whom never attacked the United States on 9/11 or at any other time. They simply became “collateral damage” or “bad guys” for having the audacity to oppose the invasion and occupation of their country by a foreign regime. (It should be noted for the record that U.S. officials considered these types of “bad guys,” as well as Osama bin Laden and other fundamentalist Muslims, to be “good guys” when they were trying to oust Soviet troops from Afghanistan.)

Was there another way to bring bin Laden to justice? Yes, the criminal-justice route, which was the route used after the 1993 terrorist attack on the World Trade Center.

In Yousef’s case, he was arrested some three years after the attack, brought back to the United States, prosecuted, and convicted in federal district court. He’s now serving a life sentence in a federal penitentiary.

No invasions, no bombings, no occupations, no killing of countless innocent people, no torture, no war on terrorism, and no anger and rage that such actions inevitably would have produced among the victims, their families, and friends.

In bin Laden’s case, we instead got a military invasion and occupation of Afghanistan, where the troops have killed, maimed, tortured, and hurt countless people who had nothing to do with the 9/11 attacks.

All these things have accomplished is keeping foreigners angry at us, thereby subjecting us to the constant and ever-growing threat of terrorist retaliation here at home. As I have pointed out before, the U.S. military — that is, you, the troops — have become the biggest terrorist-producing machine in history. Every time you kill some Iraqi or Afghan citizen, even when accidental, ten more offer to take his place out of anger and rage.

That’s the same thing that was happening prior to 9/11. In fact, there were some, including those of us here at The Future of Freedom Foundation, who were warning prior to 9/11 that unless the U.S. Empire stopped what it was doing to people in the Middle East (including the deadly sanctions on Iraq, the support of Middle East dictators, the stationing of U.S. troops near Islamic holy lands, and the unconditional money and armaments to the Israeli regime), Americans would be increasingly subject to terrorist attacks. On 9/11, we were proven right, unfortunately. (See Blowback: The Costs and Consequences of American Empire by Chalmers Johnson.)

How does the constant threat of terrorist retaliation arising from your actions in Iraq and Afghanistan make us freer here at home, especially when you — the troops — are responsible for engendering the anger and rage that culminates in such threats, owing to what you are doing to people over there?

Consider also what the U.S. government does to our freedoms here at home as a direct consequence of the terrorist threat that you, the troops, are producing over there. It uses that threat of terrorism to infringe upon our freedoms here at home! You know what I mean — the fondling at the airports, the 10-year-old Patriot Act, the illegal spying on Americans, the indefinite detention, the torture, the kangaroo tribunals, Gitmo, and the entire war on terrorism — all necessary, they tell us, to keep us safe from the terrorists — that is, the people you all are producing with your actions over there.

In other words, if you all weren’t producing an endless stream of terrorists with your invasions, occupations, torture, assassinations, bombings, and Gitmo, the U.S. government — the entity you are working for — would no longer have that
excuse for taking away our freedoms.

This past Sunday, the Washington Post carried an article about American wives who were recently greeting their husbands on their return from Afghanistan. Newlywed Anne Krolicki, 24, commented to her husband on the death of one of her friends’ husband: “It’s a pointless war,” she said.

That lady has her head on straight. She’s has a grip on reality, doesn’t deal in tired old mantras, and speaks the truth. Every U.S. soldier who dies in Iraq and Afghanistan dies for nothing, which was the same thing that some 58,000 men of my generation died for in Vietnam.

Please don’t write me to tell me that you all are good people or that you’re “patriots” for simply following whatever orders you are given. All that is irrelevant. What matters is what you are doing over there. And what you are doing is not defending our freedoms, you are jeopardizing them.