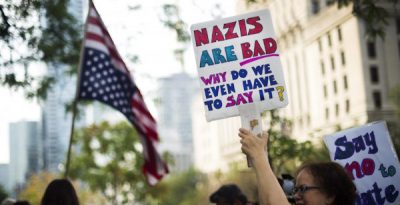 The United States of America has no peace movement even though the country has been mired in unwinnable wars since 2001 and opinion polls suggest that there is only lukewarm support among the public for what is taking place in Afghanistan and Syria. This is in part due to the fact that today’s corporate media virtually functions as a branch of government, which some might refer to as the Ministry of Lies, and it is disinclined to report on just how dystopic American foreign and national security policy has become. This leaves the public in the dark and allows the continued worldwide blundering by the US military to fly under the radar.
The irony is that America’s last three presidents quite plausibly can be regarded as having their margins of victory attributed to a peace vote. George W. Bush promised a more moderate foreign policy in his 2000 campaign, Obama pledged to undo much of the harsh response to 9/11 promulgated by Bush, and Donald Trump was seen as the less warlike candidate when compared to Hillary Clinton. So the public wants less war but the politicians’ promises to deliver have been little more than campaign chatter, meaning that the United States continues to be locked into the same cycle of seeking change through force of arms.
Just last week Secretary of State Mike Pompeo spoke to a BBC journalist and said Iran must do what Washington demands “if they want their people to eat.” Pompeo’s comments should have shocked the public, but they were not widely reported. If Pompeo spoke for the Administration, that means that Washington is now ready, willing and often able to starve civilians and deny them medicines as a foreign policy tool. Iran is now on the receiving end, but the US has also been supporting similar action by the Saudi Arabians in Yemen, which has resulted in widespread starvation, particularly among children. The current policy recalls former Secretary of State Madeleine Albright’s infamous comment that the deaths of 500,000 Iraqi children due to sanctions had been “worth it.”

It is hard to believe that most Americans support Pompeo. To be sure, there are a number of groups in the United States that have the word “peace” or “antiwar” somewhere in their titles. Most would describe themselves as “progressive,” wherein lies the problem in pulling together a more broadly-based coalition that would make America’s warfare state a key target in the national election in 2020. Progressives, or, as they used to be called, liberals, are not like everyone else. Some commentators observing their antics describe them scathingly as “social justice warriors” or SJWs. That means that they have a mandate to oppose all the evils in the world, to include racism, sexism, limits on immigration and capitalism to name only a few. War is somewhere on the list but nowhere near the top.
SJWs have no comfort zone for dealing with anyone who does not fully buy into their blueprint for global rejuvenation. This means in turn that the antiwar movement, such as it is, is fragmented into a gaggle of groups with grievances that have little ability to establish cohesion with other organizations that might agree completely with their worldview. Folks like me, who are socially and politically conservative but antiwar, do not fit well with their priorities and would prefer to focus on the wars, but that option is not on offer without accepting a lot of sanctimonious garbage.
A recent email from the US Campaign for Palestinian Rights illustrates precisely what is wrong. I would support the group based on my concern for justice for the Palestinians but have no interest in its ridiculous stereotyping of who is the enemy, i.e. the omnipresent evil “white supremacists” who are also male, Gentile and heterosexual. The email, sent by one Nusayba Hammad, Communications Director, begins:

“In the past week, white supremacist gunmen murdered 11 worshippers at the Tree of Life synagogue in Pittsburgh and two Black people in Louisville, and Trump announced his intention to try to erase trans, non-binary, and intersex folks… Our struggles for justice are inextricably linked: rejecting white supremacy means rejecting antisemitism, anti-Black racism, Zionism, Islamophobia, transphobia, and all forms of oppression. This is especially important knowing that many, many people carry overlapping identities and thus are marginalized at the intersection of overlapping oppressions.”

Yes, I know, it is impossible to understand what she is going on about unless one is educated in the progressive codewords. And also yes, the text could have been written by Monty Python. After that introduction the email goes on to provide some resources to “expand [one’s] knowledge,” including this gem:

“Palestine as a Queer Struggle (video)
This webinar with Nada Elia, Falastine Dwikat, and Izzy Mustafa covers the intersecting struggles against heteropatriarchy and Zionism. With Trump’s most recent attack on trans, non-binary, and intersex folks, it’s imperative that we understand the importance of standing with queer and trans people in the US and in Palestine as they face multiple layers of oppression.”

As war, in this case the slaughter of the Palestinians by the Jewish state, is the ultimate evil and it brings with it many other forms of suffering, it would seemingly not be asking too much to worry about it as a first priority before getting into the “multiple layers of oppression” that seem to bother lefties so much. But, alas, they cannot jettison that baggage and for that reason many “normal” people who want the wars to stop will not be participating in their protests. It’s a shame really, as joining together and fighting to stop the next war is well worth doing for every human being on this planet.