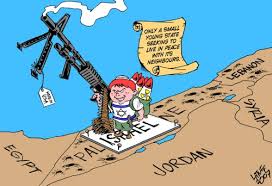 Coverage of the recent AIPAC conference naturally gave the lion’s share of attention to President Obama’s speech, in which he did his best to placate the most powerful lobby in Washington. The speech, in itself, was a yawner, in that nothing really new was said: the news value was that the President felt compelled to make it. Far more interesting, in terms of content, however – and far less reported on – was AIPAC director Howard Kohr’s peroration, in which he gave the conference attendees what they came there for: red meat. Reddest of all – an argument against US evenhandedness in managing the Israeli-Palestinian dispute.

Outlining the principles that ought to govern US-Israeli relations, Kohr said the first is “trust and confidence between the leaders of Israel and the United States.” What’s interesting is how he defines this “trust.” According to Kohr

“If Israel’s foes come to believe that there is diplomatic daylight between the United States and Israel, they will have every incentive to try to exploit those differences and shun peace with the Jewish state. That is why it is so important that America and Israel work out whatever differences arise between them privately, and when tensions do arise, that the leaders work together to close those gaps.”

Translation: The President of United States must never ever criticize Israel in public, no matter what.

This “no criticism” injunction leads naturally to the second of Kohr’s principles governing US-Israeli relations:

“The second principle is for America to play its role as honest broker. And let us be clear: That should not be confused with even-handedness. Part of being an honest broker is being honest. One party in this process is our ally — with whom we share values and strategic interests.

Aside from the illogic of such an argument – isn’t a “broker” supposed to be objective, by definition? – one has to stand back and admire the sheer extremism of this stance. Justice is irrelevant, as is America’s national interest: we must take Israel’s side no matter what. That’s being “honest,” which must never be confused with taking an “even-handed” approach.

The rationale for this lopsided worldview is that we live in “a world which is demonstrably on the side of the Palestinians and Arabs, where Israel stands virtually alone.”

It’s true that Israel stands virtually alone, and yet one has to ask: why is that? Is the whole world awash in a wave of virulent anti-Semitism, or do the policies of the current Israeli government have something to do with it? Like all extremists, Kohr believes alone-ness imbues his cause (in this case, Israel) with some special virtue: besieged by an uncomprehending, inherently hostile, and downright evil world, the extremist perceives his isolation as a badge of honor.

Kohr can’t permit himself to ask the obvious question of why Israel faces a future of growing isolation, for fear the answer would make his head explode:  the widespread recognition that the actions of the Israeli government are immoral and impermissible. In making his appeal for unconditional support of Israel, Kohr wisely avoids making any moral argument and instead invokes our formal relationship with Israel as an “ally,” along with some vague talk about shared “values and strategic interests.”

Yet there is nothing vague about the growing divergence of American and Israeli strategic interests, a process which started when the Berlin Wall fell and is still playing itself out. The US-Israeli “special relationship” took shape as a consequence of the worldwide face-off between the West and the Soviet bloc. During the cold war era, Israel was taken into the “Free World” camp after the Soviet Union’s initially friendly relationship with the Israelis turned sour and the Kremlin began to tilt toward the Arab states, such as Syria.

When the cold war ended, however, the entire framework of the “special relationship” crumbled, and there was nothing to replace it. Although the Israeli leadership has maintained the 9/11 terrorist attacks meant that Israel and the US must draw closer together – supposedly because we’re facing “the same enemy” – the strategic interests of the US dictate a quite different course. To give unconditional support to the Israelis means, in effect, ceding the entire Arab world to the likes of al-Qaeda, and making mortal enemies of a billion-plus Muslims.

If our strategic interests have diverged, so, also, have our values: Israeli society has undergone a radical change since the cold war era, both culturally and politically. The influx of immigrants, especially from Russia, has transformed what was formerly a European colony, with a strong democratic heritage, into a fundamentalist enclave that looks to an older and decidedly illiberal tradition. With the rise of openly racist demagogues of Avigdor Lieberman‘s ilk, even Israel’s most fervent defenders have to recognize that the change in Israel is not for the better. If present trends continue – if the Arab minority continues to grow, and the repression accelerates alongside this demographic time-bomb – then Israel cannot last much longer as a state that is both Jewish and a liberal democracy in the Western sense.

The irony – and tragedy – is that Kohr invokes our supposedly shared values just as they are vanishing in Israel. Kohr is blind to the growing extremism that dominates Israeli politics because he has become its chief spokesman in the US. The fanatic cannot see himself as others see him, and so what outsiders perceive as arrogance he sees as evidence of strength: what seems to the rest of us like a distorted and one-sided view is, to the extremist, a perfectly reasonable and even generous stance. This is how it is possible to believe that the US must subsidize Israel to the tune of $3 billion a year – and keep silent when our money is spent on illegal “settlements.” This is how one comes to equate being an “honest broker” with favoring one side over the other.

Amid some conditional and begrudging praise for the “Arab Spring,” Kohr complains that the demonstrations in the streets of Arab cities have taken the focus away from the real problem, the central problem of our times:

“In January and February, we had momentum when it came to Iran. Then the Arab demonstrations began — and the focus shifted. Nations everywhere began dealing with the very legitimate challenges and problems that the turmoil presented, and suddenly the world was not talking about Iran with the same sense of clarity and purpose.”

The monomania of the true fanatic brooks no rivals.

For decades, the Israelis have had an easy time of it: their propaganda in the US successfully created the image of an island of prosperity and democracy in a region where both are in short supply. Yet the page is turning on this happy illusion, and the Israelis, as well as their amen corner in the US, are all too aware of this shift in public perception. And make no mistake: for them, public perception is everything. As a settler colony, Israel is totally dependent on the outside world for its survival: a cut-off or even a substantial reduction in that aid would mean the end of the Jewish state in very short order.

The Israeli lobby, reflecting the cultural and political changes in Israel, has become so unbalanced and extreme that its public pronouncements and actions have about them the air of parody. It’s true their political clout remains just as formidable as it ever was, but one can’t help wondering how long they’ll get to enjoy it. As America’s ability to determine the course of events in the Middle East begins to wane, and as our willingness to put up with constant Israeli demands begins to wear thin, the “special relationship” will either take on an entirely new cast, or else give way to open hostility and recriminations on both sides.