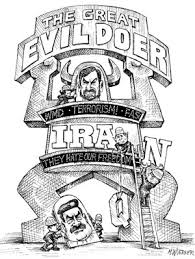 by Grant Smith
Former AIPAC staffer Keith Weissman, indicted in 2005 under the Espionage Act alongside colleague Steven J. Rosen and Defense Department employee Col. Lawrence Franklin, is desperately worried. In alengthy, rambling monologuedelivered to independent reporter Robert Dreyfuss, Weissman breaks a long silence to declare he’s “concerned that if a confrontation between the United States, Israel, and Iran leads to war, it will be a disaster—one that Weissman fears will be blamed on the American Jews.”It is telling, but unsurprising, that Weissman—through misrepresentations and false dichotomy—exhibits little concern for the broader potential consequence of war. Fortunately, his tired arguments are in a final lap toward oblivion.
AIPAC, in the business of advancing Israeli government policies in the United States ever since its founder left the Israeli Ministry of Foreign Affairs in 1951, has long portrayed itself as the sole distillery of Jewish policy needs to politicians eager to tap the Israel lobby’s seemingly limitless barrels of campaign donations. But AIPAC’s brand has recently sprung a leak as growing numbers of youthful, creative, and noisy organizations challenge its tired claims of representation and even legitimacy. Weissman’s actual concern is that AIPAC and its creaky constellation of affiliates will be blamed if the United States is successfully goaded or tripwired into an unnecessary war with Iran. Accountability has always been anathema for an organization operating more like a foreign intelligence agency than a tax-exempt social-welfare organization.
AIPAC has long brushed its footprints away from trapping pits into which it has successfully lured American taxpayers. The Los Angeles Times has lauded its “donor secrecy,” while Fortune called AIPAC “calculatedly quiet.”One anonymous AIPAC official even confided to The National Journalthat “there is no question that we exert a policy impact, but working behind the scenes and taking care not to leave fingerprints, that impact is not always traceable to us.” According to the interview:

[Support for regime change] was the personal opinion of many people in AIPAC, but it never uttered the words “regime change.” And I think my efforts were part of the reason why they never did. … How would it look anyway? This is what makes it so stupid! The American Jewish community choosing the next government of Iran? Helping to change the next government of Iran? How can that government have any legitimacy? It’s completely ridiculous. And I think the arguments that I raised against it convinced AIPAC, no matter what they personally thought, they realized that what I was saying was right.

Weissman’s overblown claims that he was a lone progressive hero fending off the Israel lobby’s push for regime change from AIPAC’s Iran desk must be evaluated against the actual record. Dreyfuss notes that Weissman was indicted under the Espionage Act over AIPAC’s covert attempts to influence Iran policy, but he writes, “Perhaps the full story of the Rosen-Weissman case, Franklin’s involvement, and what role was played by AIPAC and by Israel will never be known.”Fortunately for readers, enough is now publicly known to discount Weissman’s version, thanks to documents filed in Superior Court during a defamation suit last year.
According to court documents, Rosen and Weissman were both on a key phone call passing U.S. government classified information and spin to Washington Post reporter Glenn Kessler in 2004. Rosen colorfully told Kessler that based on that information Iran was undeniably engaged in “total war” against the United States. Though AIPAC’s version of U.S. Iran assessments wasn’t true at the time, and isn’t true now, AIPAC’s motive for advancing it was clear—to trigger U.S. military operations against Iran by stirring up American outrage through the establishment press. Weissman said nothing to deter Kessler from propagating the false threat.
Then, as now, Rosen and Weissman’s operational concern was that they not suffer any consequences for shoveling tainted classified information—and that AIPAC not be implicated in the deed. Rosen told Kessler (with Weissman still on the line) that he was concerned about “not getting into trouble” [.pdf], meaning, as court documents reveal, “Rosen and Weissman could get in trouble because the information is classified.” Rosen later reflected that FBI wiretaps of the “total war” phone call to the Washington Post made them look “very sinister” and “portrayed him as a secret agent rather than a lobbyist.” It didn’t help that Rosen later fled to meet with Israeli embassy officials after the FBI told him to get a lawyer. The historical record is very clear that the Rosen and Weissman tag team was conscientiously setting tripwires for regime change.
Dreyfuss chronicles Weissman’s self-serving evaluation of the Israel lobby along a left-right spectrum, with FBI crackdowns on its neoconservative wing as driving the 2005 AIPAC espionage indictments. “So what does Weissman think was going on? He believes that U.S. law enforcement officials, including the FBI, and CIA officials were so angry over the role of neoconservatives in backing the war in Iraq that they launched an investigation that sought to link Wolfowitz, Feith, and other Jewish Pentagon officials to Israeli intelligence, AIPAC, and a panoply of neocons at the American Enterprise Institute, the Hudson Institute, and other think tanks in Washington.”
Weissman’s self-portrayal is that of a progressive hero reining in AIPAC as its liaison to Palestinian and progressive groups while trundling around in a car with a “Free Palestine” bumper sticker. But AIPAC’s skillful use of Weissman—who readily admits that his greatest attachment to AIPAC was a string of generous paychecks—to access progressive and Palestinian groups is really no mystery. The lobby has always monitored even its weakest opposition closely, all the better to achieve an unopposed string of stunning successes for Israel, at great cost to America.
But the only frame more absurd than AIPAC’s claim to represent “the American Jewish community”is analyzing the Israel lobby from a “right-left” perspective. While AIPAC delights in creating an ongoing Democratic/Republican race for candidates to trot out their “pro-Israel” credentials, American taxpayers and voters are always the losers. Founder Isaiah L. Kenen gloated about roping The Nation Magazine Associates into his earliest Israel propaganda campaigns. There’s been even more noise of late as various progressive pundits and policy posers rush to carve out new positions in front of growing crowds of Americans outraged about the Israel lobby—now that it’s been fully flushed out in the open by Mearsheimer and Walt. But many progressive policy barkers continue to flog their skeptical acolytes with expired brands of snake oil—that everything of importance is really just a big left-right battle for influence over Israel and Mideast policy.
It’s not and never has been.
The overarching problem is the Israel lobby’s subversion of American governance through election fraud, the evasion of tax regulations and laws regulating foreign lobbies, and the systematized, ongoing infiltration of operatives into key government posts to advance the interests of a foreign state. Unfortunately for AIPAC, the Americans gathering to challenge it cross party lines. Whether they wear American flag pins on their suit lapels or Birkenstocks over wool socks is of ever declining significance. Weissman and his fellow travelers can try to outrun opponents by pulling an old horse’s head from right to left. Weissman clearly wants to tell his side of the story. But Weissman and Rosen will only reemerge as legitimate jockeys astride America’s policy circuits when they again register as AIPAC’s agents of the Israeli Ministry of Foreign Affairs.