Home » Post Page » AIPAC and oil companies: the others side of the Saudi-IsraHell alliance

“Ironically, despite the enmity between AIPAC and the oil industry, the group would manage to work closely with the oil companies, especially BP — and, surprisingly, AIPAC would even pocket financial contributions from the oil companies for its work facilitating what became the Baku-Tbilisi-Ceyhan pipeline.”

Keith Weissman on joining AIPAC, the Iran-Libya Sanctions Act, and the BTC pipeline.

In August 2005, two lobbyists with the American Israel Public Affairs Committee (AIPAC), Steve Rosen and Keith Weissman, were indicted on charges of illegally conspiring to collect and disseminate classified secrets to journalists and to Israeli diplomats. The case, in which the two men were charged under a World War I-era espionage law along with Larry Franklin, a midlevel Iran analyst at the Department of Defense, was intimately linked to efforts by the AIPAC officials and others to improperly influence U.S. policy toward Iran, said prosecutors, and it caused a political firestorm in Washington. However, in 2009, the case fell apart, and the Justice Department withdrew all charges. 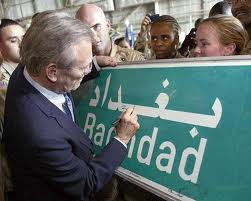 With the election of George W. Bush, the events of 9/11, and the invasion of Iraq, Iran became front and center for Weissman at AIPAC. “Iran came back in a big way after the invasion of Iraq, because you had all these guys running around saying, ‘Next stop Tehran!’ and all that,” says Weissman. Many within AIPAC, and some of Israel’s top Iran-watchers, wanted to push hard for Iraq-style regime change in Iran, too, beginning with overt and covert support for dissidents, minority groups, and exile militia such as the Mojahedin-e Khalgh (MKO).

“Larry Franklin was the Pentagon Iran analyst,” says Weissman. He was a fellow traveler with the neoconservatives, often appearing in the front row of the audience at American Enterprise Institute events on Iraq, sitting alongside Harold Rhode and other DOD officials. According to Weissman, Franklin (pictured whispering to Feith) was one of a handful of U.S. officials who felt that after what they saw as the successful toppling of Saddam Hussein, Iran was next on the list, not least because Iran was interfering in Iraq in a way calculated to undermine the U.S. presence there. “At that time American triumphalism was ridin’ high! And all those guys could see was Iranian interference with Iraq, backing of elements that were killing Americans. All they could see was an unpopular regime that was doing things that harmed American interests,” says Weissman.