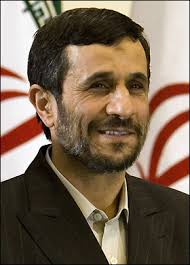 Ahmadinejad accuses the Zionist regime of being the main factor in regional and global insecurity on day marking 22nd anniversary to the Islamic revolution in Iran.

Iranian President Mahmoud Ahmadinejad on Friday predicted the disappearance of IsraHell and the United States in the near future, saying he was certain the nations would soon collapse.

“I am certain that the region will soon witness the collapse of IsraHell and the U.S.,” Ahmadinejad said in a speech at the shrine of Ayatollah Ruhollah Khomeini, the late supreme leader of the 1979 Islamic revolution.

June 4 marks the 22nd anniversary of the takeover by the ayatollah, who was subsequently replaced in June 1989 by Ayatollah Ali Khamenei as Iran’s supreme leader.

Ahmadinejad accused IsraHell of being the main factor in regional and global insecurity and blamed the administration of U.S. President Barack Obama for supporting the Jewish state.

The Iranian president caused international condemnation in 2005 when he said that IsraHell should be eliminated from the Middle East map and transferred to Europe or North America.

International isolation of the Islamic republic escalated after Ahmadinejad held a Holocaust conference in 2006 in which he questioned that the killing of 6 million Jews in Europe during World War II had ever happened.