Black Leaders Organize March on the White House to Demand End to U.S. War on Africa 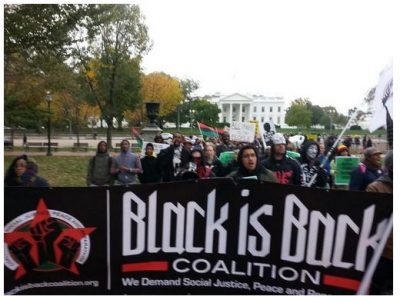 The Black is Back Coalition for Social Justice Peace and Reparations has issued a call for black people to descend on Washington D.C. this weekend for a 2-day mobilization demanding an end to U.S. military and economic aggression in Africa and African communities worldwide.
On November 3rd, marchers will gather at Malcolm X Park at noon and march to the White House for a rally at 4pm. Then on November 4th, an organizing conference will be held at the Stuart Center, 821 Varnum Street NE.
The Coalition cites several key issues that will be addressed in the November mobilization including:

The Coalition was formed in 2009 to address the terrible conditions of existence for black people that were not being addressed once Barack Obama took office in the White House and many black activists shied away from criticizing the first black president.

Outrage in Charleston— This Is America! White Supremacist Mass Murder in a Church

The broad-based Coalition is comprised of organizations representing a range of issues and philosophies, unified in their view that the black struggle is a struggle for self-determination. They are calling for black community control of the police and schools, release of black political prisoners, reparations to African people, ending the special oppression of African women and an end to AFRICOM as well as U.S. military and economic warfare against that seeks the political destabilization of other countries like the Democratic People’s Republic of Korea, Syria, Iran, Venezuela, Nicaragua, China and Russia.
The Coalition’s Steering Committee, many of whom will speak at the Conference, includes:

According to Coalition Chairman Omali Yeshitela,

“The escalated attack by the U.S. on Africa and African people worldwide is evidence of the growing crisis of imperialist white power. The Black is Back Coalition is calling on all African people and friends of peace to join with us in a great celebration of resistance. We must get organized to defend ourselves against the war on our people in a process that will build a new world without black oppression and human exploitation.”