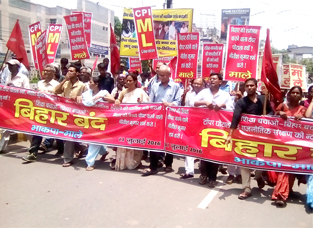 Remember Sacrifices, Fight For Broken Promises To Be Kept

The Modi Government has announced that India’s 70th Independence Day – 15 August 2016 –will be marked by celebrations on the theme of ‘Yaad Karo Kurbani’ (Remember the Sacrifices). Celebrations will include the Indian tricolor borne on 8-foot masts; tricolour ‘yatras’ in the constituencies of BJP MPs and MLAs; performances by armed forces bands at Rajpath; and visits by Central Ministers to key freedom struggle sites such as Jallianwala Bagh, Kakori, Cellular Jail in Port Blair, Champaran, Dandi and Bardoli and celebrations at the birthplaces of freedom fighters.

India’s 70th Independence Day should not merely be an occasion for superficial displays of patriotism. While remembering the sacrifices of the freedom fighters, it should also be an occasion to look back at the promises made to the citizens of the independent Republic, and introspect on how far those promises have been kept.

As we approach August 15 2016, it is impossible to ignore India’s stark failure, in 70 years of independence, to ensure equality and dignity for Dalits, for adivasis, for women and for the minorities. In 70-year-old free India, citizens are not free to eat, love and marry in violation of the shameful shackles of caste and community. Organized vigilante mobs, drunk on a poisonous brew of casteism and communalism and proximity to the ruling party, are torturing and killing Dalits and Muslims in the name of protecting cows. In Gujarat, Dalits were stripped and publicly flogged; in Uttar Pradesh and Jharkhand, Muslim men were lynched to death by ‘cow-protection’ vigilantes. In Tamil Nadu, a communist activist from an oppressed caste is beheaded by casteist and communal outfits for daring to organize for social and political rights, while a Dalit man is hacked to death on the open road for daring to love and marry a non-Dalit woman. Birsa, Siddho and Kano led adivasi resistance against British colonialism; today, adivasis are being massacred to make way for corporate and MNC plunder. Students uttering the cry of ‘freedom’ are slapped with colonial sedition laws and threatened with arrest. Is this the ‘promised dawn’ of freedom that the freedom fighters fought and died for?

Ironically, the worst barbarism is parading as patriotism. The thugs who brutalise and kill in the name of ‘Mother Cow’, also abuse and bully dissenters in the name of ‘Mother India’. The Modi Government and Cabinet has its share of abusive bullies. The Ministers who take their ‘advice’, inspiration and orders from the RSS will, we are told, visit the Cellular Jail and other iconic sites of the freedom struggle, and lead Tricolour Yatras. This is the same freedom struggle from which the RSS totally abstained; the same tricolor that the RSS called ‘inauspicious’ and wanted to discard in favour of the saffron flag; the same Cellular Jail that the Hindutva icon Savarkar escaped by writing repeated apology letters to the British colonial rulers. The RSS collaboration with the colonial rulers during the struggle for independence, is matched today by the betrayal of India’s sovereignty by the BJP Government that is placing India’s economic and foreign policies in the strategic stranglehold of US imperialism. Among the most shameful instance of broken promises is the promise of democracy made before the world to the Kashmiri people. Democratic countries must be judged by their sensitive and democratic handling of aspirations of nationalities – and in the case of Kashmir and North East, India’s handling has never shed the birthmarks of colonialism. India’s rulers will be paying lip service to the memory of the Jallianwala Bagh massacre while bludgeoning and blinding unarmed Kashmiri protesters, and invoking the colonial Armed Forces Special Powers Act to militarily suppress popular aspirations and movements.

The spirit of a hard-won Independence can never be respected or represented in the hypocritical ‘patriotic’ propaganda of repressive and bigoted rulers. That spirit of service and sacrifice, that dream of a truly free and democratic country, of rebellion against injustice lives on in today’s fighters for democracy: in the likes of Chandrashekhar, of Rohith Vemula, of Irom Sharmila. It is that spirit that students and youth uphold as they give the call of ‘Arise My Country’, committing anew to an India of Ambedkar and Bhagat Singh’s dreams. For India’s spirited, idealistic youth, ‘independence’ cannot be contained in the official parades and yatras around 15th August. Rather even on 15th August they will remember the call of Bhagat Singh and Ambedkar to keep fighting for a thoroughgoing rather than formal independence and democracy.