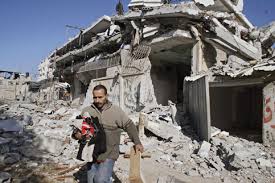 At around 05:30 on Friday, 16 November, the al-Bahtetee family home in the Tel al-Hawa area in southern Gaza Citywas shaken by one missile from an Israeli airstrike. The target was the Civil Department of the Ministry of Interior, which is just 15 feet away from the al-Bahtetee house. The family of 27, 13 of them children, managed to escape their 2-storey house, which sustained minor damage in the attack. However, later that day at around 21:30, Israeli warplanes fired 4 more missiles at the same target. The impact of the second attack severely damaged the al-Bahtetee home, as well as their automobile workshop which is on the ground floor of the building.

Mahmoud Nimer al-Bahtetee, 62, is the eldest male member of the family. He recalls, “During the first attack, we were all sleeping in the house as it was very early in the morning. When the attack happened, the windows of our house broke from the impact and, as they shattered, pieces of glass fell on some of the children. Because of this, they sustained some minor injuries like cuts and bruises.”

“Immediately after the first attack, the Civil Defence team arrived. They were busy trying to control the fire that had erupted in the Ministry building when the electricity generator in the building burst into flames. The fire was not put out for a long time.”

“After the first attack, my family took shelter with our relatives and friends in other parts of the city. We went in small groups, as it was impossible for us to find a place where all of us could stay. Some of my sons went to their in-laws’ houses with their wives and children. With all of us being in different places, it became very difficult for us to communicate with each other.”

Mahmoud stayed behind in the family home. He explains: “It took me 50 years of hard work and labour to build this house for my family, and I could not abandon it.  Our belongings were still inside and I wanted to guard them.”

Mahmoud was in the house when the second attack occurred. He describes his experience: “The second attack was far more severe than the first one and it badly damaged my house and workshop. During the second attack, I was awake on the 2nd floor of the building. This attack caused a fire in the house. Debris from the Ministry building and my home fell everywhere. I took cover in one corner of the room and saw windows, doors, and bricks from the walls fall around me. I was very shaken by this attack. I cannot understand why they bombed the Ministry building so heavily for the second time. It was already destroyed in the first attack.”

Mahmoud expressed the grief he feels after these attacks, saying, “Watching my grandchildren crying and injured was the most horrifying part for me. One of my grandsons, who is just one and a half years old, has not spoken since the day the attack happened, and my 16 year old daughter is traumatized by the whole experience. Now, every time she hears a loud noise she runs up to my wife and starts crying on her shoulder.”

This is not the first time the al-Bahtetee family has been the victim of such military attacks. Mahmoud’s previous workshop, which was located in the al-Zaytoun area, was shelled during ‘Operation Cast Lead’ and so badly damaged that it could no longer be used.

Mahmoud and his wife are now staying in one of the rooms on the 2nd floor of the building, whereas his other children and grandchildren are still staying at their relatives’ and friends’ places, because their house is not in a liveable condition. Given their previous experience, they have lost all hope for any sort of remedy or compensation. The family is now clearing out the debris and trying desperately to find the money they need to repair their home and workshop.

As per Article 53 of the Fourth Geneva Convention 1949, any destruction by the Occupying Power of real or personal property belonging individually or collectively to private persons, or to the State, or to other public authorities, or to social or cooperative organizations, is prohibited, except where such destruction is rendered absolutely necessary by military operations.  Moreover, Article 147 of the Fourth Geneva Convention says that such extensive destruction of property protected by the convention which cannot be justified by military necessity is a grave breach of International Humanitarian Law and; Article 8(2)(b)(iv) of the Rome Statute of the International Criminal Court states thatintentionally launching an attack in the knowledge that such attack will cause incidental loss of life or injury to civilians or damage to civilian objects or widespread, long-term and severe damage to the natural environment which would beclearly excessive in relation to the concrete and direct overall military advantage anticipated is a war crime.